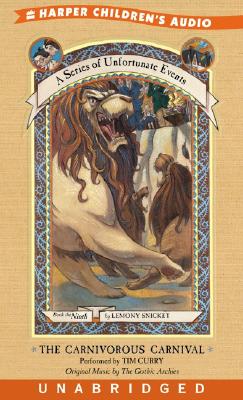 This is book number 9 in the Series of Unfortunate Events series.

Everybody loves a carnival! Who can fail to delight in the colourful people, the unworldly spectacle, the fabulous freaks?

A carnival is a place for good family fun—as long as one has a family, that is. For the Baudelaire orphans, their time at the carnival turns out to be yet another episode in a now unbearable series of unfortunate events. In fact, in this appalling ninth installment in Lemony Snicket's serial, the siblings must confront a terrible lie, a caravan, and Chabo the wolf baby.

With millions of readers worldwide, and the Baudelaire's fate turning from unpleasant to unseemly, it is clear that Lemony Snicket has taken nearly all the fun out of children's books.

Tim Curry has portrayed many memorable characters, most notably the role of the scientist in the Broadway and film versions of The Rocky Horror Picture Show, and Arthur in the Broadway production of SPAMalot.

This feature require that you enable JavaScript in your browser.
END_OF_DOCUMENT_TOKEN_TO_BE_REPLACED

END_OF_DOCUMENT_TOKEN_TO_BE_REPLACED

This feature require that you enable JavaScript in your browser.
END_OF_DOCUMENT_TOKEN_TO_BE_REPLACED