A Series of Unfortunate Events #12: The Penultimate Peril CD (CD-Audio) 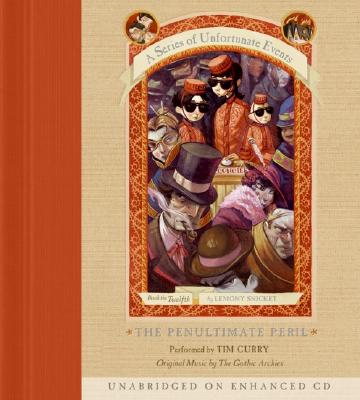 This is book number 12 in the Series of Unfortunate Events series.

Very little is known about Lemony Snicket and A Series of Unfortunate Events. What we do know is contained in the following brief list:

Even less is known about book the twelfth in this alarming phenomenon. What we do know is contained in the following brief list:

Tim Curry has portrayed many memorable characters, most notably the role of the scientist in the Broadway and film versions of The Rocky Horror Picture Show, and Arthur in the Broadway production of SPAMalot.

This feature require that you enable JavaScript in your browser.
END_OF_DOCUMENT_TOKEN_TO_BE_REPLACED

END_OF_DOCUMENT_TOKEN_TO_BE_REPLACED

This feature require that you enable JavaScript in your browser.
END_OF_DOCUMENT_TOKEN_TO_BE_REPLACED