Lucky Child: A Daughter of Cambodia Reunites with the Sister She Left Behind (Paperback) 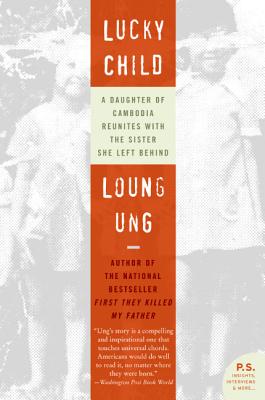 After enduring years of hunger, deprivation, and devastating loss at the hands of the Khmer Rouge, ten-year-old Loung Ung became the "lucky child," the sibling chosen to accompany her eldest brother to America while her one surviving sister and two brothers remained behind. In this poignant and elegiac memoir, Loung recalls her assimilation into an unfamiliar new culture while struggling to overcome dogged memories of violence and the deep scars of war. In alternating chapters, she gives voice to Chou, the beloved older sister whose life in war-torn Cambodia so easily could have been hers. Highlighting the harsh realities of chance and circumstance in times of war as well as in times of peace, Lucky Child is ultimately a testament to the resilience of the human spirit and to the salvaging strength of family bonds.

Loung Ung was the National Spokesperson for the “Campaign for a Landmine Free World,” a program of the Vietnam Veterans of America Foundation, which was awarded the Nobel Peace Prize for co-founding the International Campaign to Ban Landmines. Ung lectures extensively, appears regularly in the media, and has made more than thirty trips back to Cambodia. She is also the author of Lucky Child: A Daughter of Cambodia Reunites with the Sister She Left Behind and LuLu in the Sky.

“Ung’s story is a compelling and inspirational one that touches universal chords. Americans would do well to read it.”
— Washington Post Book World

“Written with an engaging vigor and directness, Lucky Child is an unforgettable portrait of resilience and largeness of spirit.”
— Los Angeles Times

“Deeply stirring...heart-breaking and not less than brilliant.”
— Miami Herald

“At once elegiac and clear-eyed, this moving volume is a tribute to the path not taken.”
— Vogue

“Heart-rending and eloquent . . . a moving reminder of human resiliency and the power of family bonds.”
— Newsweek

“A rich narrative that explores the ravages of war and the strength of family bonds...powerful and moving.”
— Amnesty International

“A unique glimpse into America’s “melting pot”--a melting pot born of indescribable suffering but brimming with irrepressible life.”
— Samantha Power, author of "A Problem from Hell": America and the Age of Genocide

“As piercing and poignant as its title.”
— Richard North Patterson

“I encourage everyone to read this deeply moving and very important book.”
— Angelina Jolie, Goodwill Ambassador for the United Nations High Commission for Refugees

This feature require that you enable JavaScript in your browser.
END_OF_DOCUMENT_TOKEN_TO_BE_REPLACED

END_OF_DOCUMENT_TOKEN_TO_BE_REPLACED

This feature require that you enable JavaScript in your browser.
END_OF_DOCUMENT_TOKEN_TO_BE_REPLACED