Saving Jesus from the Church: How to Stop Worshiping Christ and Start Following Jesus (Paperback) 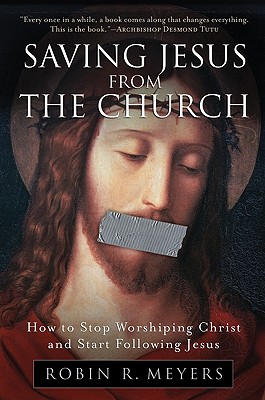 From One of America's Leading Pastors, a Bold Call to Restore Christianity's True Mission: Following Jesus

The marriage of bad theology and hypocritical behavior by the church has eroded our spiritual lives. Taking the best of biblical scholarship, Meyers recasts core Christian concepts in an effort to save Christianity from its obsession with personal salvation. Not a plea to try something brand new, but rather the recovery of something very old, Saving Jesus from the Church shows us what it means to follow Jesus's teachings today.

For over twenty years, Robin Meyers has been pastor of Mayflower Congregational, an "unapologetically Christian, unapologetically liberal" church. He is a professor in the philosophy department at Oklahoma City University, a syndicated columnist, and an award-winning commentator for National Public Radio. Meyers has appeared on Dateline NBC, the NewsHour with Jim Lehrer, and ABC World News, and writes regularly for The Christian Century.

“Robin Meyers emerges in Saving Jesus from the Church as a national voice for a new Christianity. He is a well read scholar and a superb communicator. He writes with a refreshing honesty and a disarming authority. This book is a treat.”
— John Shelby Spong, author of Jesus for the Non-Religious

“With crisply prophetic joy, Meyers calls seekers and believers alike to leave belief about God behind in favor of becoming imitators of Jesus. We can save Jesus from the church, and in doing so, recreate faith communities freed from hypocrisy and filled with hope.”
— Diana Butler Bass, author of Christianity for the Rest of Us

“Every once in a while, a book comes along that changes everything. This is the book. It is scholarly, pastoral, prophetic, and eloquent--all in equal measure. Robin Meyers has spoken truth to power, and the church he loves will never be the same.”
— Desmond Tutu

“In a progressive rather than negatively critical mode, in strong contrast to much of Far Right Protestantism, pastor/NPR commentator Meyers (philosophy, Oklahoma City Univ.) suggests with typical elegance that a recovery of true Christianity emphasizes compassion over condemnation, blessing over sin, and equity over individual prosperity. Highly recommended.”
— Library Journal, starred review

“Meyers’ insightful and provocative critique of contemporary Christianity will stimulate energetic theologizing: deconstruction, reconstruction, or impassioned defense of the inherited tradition. Thank you, Robin, for convening this urgently needed conversation.”
— Dr. James A. Forbes, Jr., president and founder of The Healing of the Nations Foundation

“A perceptive book . . . Not many authors can present such progressive ideas and still come across as reasonable and loving. Meyers masters such a task.”
— Oklahoma City Oklahoman