Showgirls, Teen Wolves, and Astro Zombies: A Film Critic's Year-Long Quest to Find the Worst Movie Ever Made (Paperback) 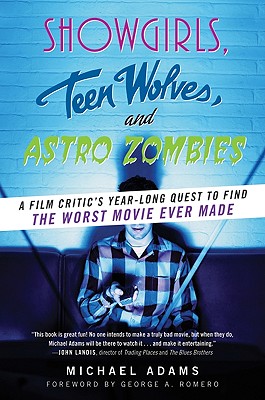 "Michael Adams's book is great fun! No one intends to make a truly bad movie, but when they do, Michael Adams will be there to watch it...and make it entertaining!" —John Landis, director of Trading Places and The Blues Brothers

In Showgirls, Teen Wolves, and Astro Zombies, film critic Michael Adams embarks on a year-long odyssey to discover the worst movie ever made, which Mystery Science Theater 3000 star, writer, and director Kevin Murphy calls "disturbingly comprehensive, joyously critical, and the best of its kind." From all-time cult classics such as Reefer Madness and Plan 9 from Outer Space to new entries to the pantheon such as Gigli and Baby Geniuses, no genre, star, or director is safe from Adams’s acerbic wit and hilarious observations. In the vein of A.J. Jacobs’s New York Times bestselling book The Know-It-All, and with the snarky sarcasm of television’s Mystery Science Theater 3000 and The Soup, Showgirls, Teen Wolves, and Astro Zombies leaves no stone unturned. With a foreword by cult director George A. Romero (Night of the Living Dead and Dawn of the Dead).

Michael Adams is the reviews editor of the Australian edition of Empire magazine and a contributor to Men's Style, Rolling Stone, and RottenTomatoes.com. He also writes the "Bad Movies We Love" column for Movieline.com and the "Schlock & Awe" column for TheWrap.com. He lives in Sydney. Those who saw his cameo as "Stoned Hippy" in the Z-grade classic Bloodlust won't be looking forward to his zombie "acting" in Survival of the Dead.

“Michael Adams’ book is great fun! No one intends to make a truly bad movie, but when they do, Michael Adams will be there to watch it...and make it entertaining.” — John Landis, director of Trading Places and The Blues Brothers

“Michael Adams is the Peter Biskind of really crappy movies. I thank him for watching these films so I didn’t have to claw my eyes out myself.” — A.J. Jacobs, New York Times bestselling author of The Know-It-All and The Year of Living Biblically

“Like many of the bad movies it celebrates, this book is addictive, mesmerizing and endlessly amusing.” — Harry Medved, co-author of The Golden Turkey Awards and The Fifty Worst Films of All Time

“Reading Michael Adams’ entertaining and disturbingly comprehensive book is like being dragged through the fun parts of Hell in a flame-proof suit. Having had both hands in the cesspools of cinema for over twenty years, I can say with confidence that this book is the best of its kind: a joyously critical, deeply personal journey through a medium we love to hate almost as much as we love to love.” — Kevin Murphy, co-star/writer of Mystery Science Theater 3000 and author of A Year At the Movies

This feature require that you enable JavaScript in your browser.
END_OF_DOCUMENT_TOKEN_TO_BE_REPLACED

END_OF_DOCUMENT_TOKEN_TO_BE_REPLACED

This feature require that you enable JavaScript in your browser.
END_OF_DOCUMENT_TOKEN_TO_BE_REPLACED