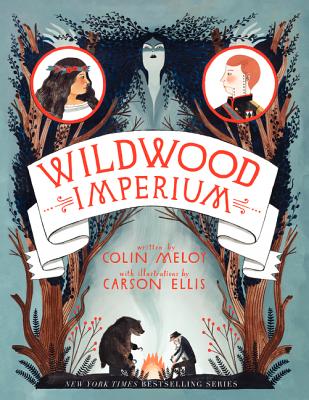 This is book number 3 in the Wildwood Chronicles series.

A young girl's midnight séance awakens a long-slumbering malevolent spirit.... A band of runaway orphans allies with an underground collective of saboteurs and plans a daring rescue of their friends, imprisoned in the belly of an industrial wasteland.... Two old friends draw closer to their goal of bringing together a pair of exiled toy makers in order to reanimate a mechanical boy prince.... As the fate of Wildwood hangs in the balance.

The Wildwood Chronicles is a mesmerizing and epic tale, at once firmly steeped in the classics of children's literature and completely fresh at the same time. In this book, Colin Meloy continues to expand and enrich the magical world and cast of characters he created in Wildwood, while Carson Ellis once again brings that world to life with her gorgeous artwork, including six full-color plates.

Colin Meloy is the author of The Whiz Mob and the Grenadine Kid and the New York Times bestselling Wildwood Chronicles as well as two picture books, The Golden Thread: A Song for Pete Seeger and Everyone’s Awake. He is also the singer and songwriter for the indie rock band the Decemberists. Colin lives in Oregon with his wife and frequent collaborator, illustrator Carson Ellis, and their sons.

Carson Ellis is the illustrator of a number of books for children, including the Wildwood Chronicles, and is the author and illustrator of the picture books Du Iz Tak?, a Caldecott Honor winner, and Home. Carson lives just outside Portland, Oregon, with her family.

This feature require that you enable JavaScript in your browser.
END_OF_DOCUMENT_TOKEN_TO_BE_REPLACED

END_OF_DOCUMENT_TOKEN_TO_BE_REPLACED

This feature require that you enable JavaScript in your browser.
END_OF_DOCUMENT_TOKEN_TO_BE_REPLACED