The Girl of Fire and Thorns (Hardcover) 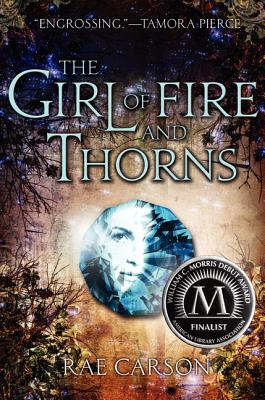 This is book number 1 in the Girl of Fire and Thorns series.

“Rae Carson has proved she’s a master and has shaken up the YA genre.”—USAToday.com

The first book in Rae Carson’s award-winning and New York Times–bestselling trilogy! The Girl of Fire and Thorns is a sweeping journey full of adventure, sorcery, heartbreak, and power. Fans of George R. R. Martin’s Game of Thrones and Leigh Bardugo’s Grishaverse will devour this fantasy series.

Once a century, one person is chosen for greatness.

Elisa is the chosen one. But she has always felt powerless, useless. Now, on her sixteenth birthday, she has become the secret wife of a handsome and worldly king—a king whose country is in turmoil. A king who needs her to be the chosen one, not a failure of a princess.

And he’s not the only one who seeks her. Fierce enemies, seething with dark magic, are hunting her. A daring, determined revolutionary thinks she could be his people’s savior. Soon it is not just her life, but her very heart that is at stake.

Elisa could be everything to those who need her most. If the prophecy is fulfilled. If she finds the power deep within herself. If she doesn’t die young. Most of the chosen do.

Don’t miss The Empire of Dreams, Rae Carson’s action-packed return to the world of The Girl of Fire and Thorns!

Rae Carson is the author of two bestselling and award-winning trilogies, as well as the acclaimed stand-alone novels Any Sign of Life and The Empire of Dreams. Her debut, The Girl of Fire and Thorns, was named a William C. Morris Award finalist and an Andre Norton Award finalist. Walk on Earth a Stranger was longlisted for the 2015 National Book Award and won the Western Writers of America Spur Award. Her books tend to contain adventure, magic, and smart girls who make (mostly) smart choices. Originally from California, Rae Carson now lives in Ohio with her husband. www.raecarson.com

“With The Girl of Fire and Thorns, Carson joins the ranks of writers like Kristin Cashore, Megan Whalen Turner, and Tamora Pierce as one of YA’s best writers of high fantasy.” — Locus

“Intoxicating . . . Readers will find themselves immersed in this world and believing it.” — Voice of Youth Advocates (VOYA)

“Elisa is a wonderful, believable hero, the kind that every reader can imagine as herself. I charged through the book in two days, savoring Elisa’s realness and her unique, wonderful world! Engrossing.” — Tamora Pierce, author of New York Times bestseller Bloodhound

“I stayed up until 2AM reading this last night. Intense, unique. . . . Definitely recommended.” — Veronica Roth, author of the best-selling Divergent

“I LOVED this book! It’s a transformation story that both teens and adults can believe in. Rae Carson has delivered a unique magical system and built a world with strong series potential.” — Cinda Williams Chima,author of the best-selling Seven Realms series

“Rae Carson’s heroine is a perfect blend of the ordinary and the extraordinary. I loved her.” — Megan Whalen Turner, author of the Newbery Honor Book, THE THIEF

“Set in intrigue-filled courts, battlefields, and windswept deserts, this riveting fantasy tests its heroine’s limits as she struggles to fulfill a destiny wrapped in an ancient mystery. A breathtaking adventure in a fascinating, richly-drawn world.” — Leah Cypess, author of Mistwood

“Distinctive for its luminous prose, its hint of romance, and Elisa, a strong, smart heroine that readers will truly fall in love with.” — Sarah Prineas, author of The Magic Thief

This feature require that you enable JavaScript in your browser.
END_OF_DOCUMENT_TOKEN_TO_BE_REPLACED

END_OF_DOCUMENT_TOKEN_TO_BE_REPLACED

This feature require that you enable JavaScript in your browser.
END_OF_DOCUMENT_TOKEN_TO_BE_REPLACED