The Bitter Kingdom (Girl of Fire and Thorns #3) (Paperback) 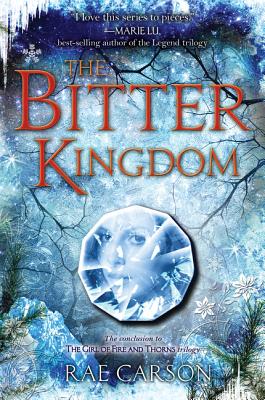 This is book number 3 in the Girl of Fire and Thorns series.

“I love this series to pieces and so should you.”—Marie Lu, bestselling author of Warcross

The third book in Rae Carson’s award-winning and New York Times–bestselling trilogy! In the deeply satisfying conclusion, seventeen-year-old sorcerer-queen Elisa travels into the unknown realm of the enemy to win back her true love, save her country, and uncover the final secrets of her destiny. Perfect for fans of Tamora Pierce and Brandon Sanderson.

Elisa is a fugitive. Her enemies have stolen the man she loves, and they await her at the gate of darkness. Her country is on the brink of civil war, her own soldiers ordered to kill her on sight.

Elisa will lead her loyal companions deep into the enemy’s kingdom, a land of ice and snow and vicious magic, to rescue Hector and win back her throne. Her power grows with every step, and the shocking secrets she will uncover could change the course of history.

Don’t miss The Empire of Dreams, Rae Carson’s action-packed return to the world of The Girl of Fire and Thorns!

Rae Carson is the author of two bestselling and award-winning trilogies, as well as the acclaimed stand-alone novels Any Sign of Life and The Empire of Dreams. Her debut, The Girl of Fire and Thorns, was named a William C. Morris Award finalist and an Andre Norton Award finalist. Walk on Earth a Stranger was longlisted for the 2015 National Book Award and won the Western Writers of America Spur Award. Her books tend to contain adventure, magic, and smart girls who make (mostly) smart choices. Originally from California, Rae Carson now lives in Ohio with her husband. www.raecarson.com

“What a conclusion to a spellbinding trilogy! The Bitter Kingdom cements Rae Carson as one of the best fantasy authors to grace the shelves. I love this series to pieces, and so should you.” — Marie Lu, New York Times best-selling author of the Legend trilogy

“The perfect conclusion to one of the most brilliant modern YA fantasies on the market today. Readers will love this whole series, and while I didn’t want to leave Elisa’s world, The Bitter Kingdom hits all the right notes. This is YA fantasy as it should be.” — Beth Revis, author of the nationally best-selling Across the Universe

“A smashing ending to a trilogy that …developed into the stellar journey of a girl who would be queen.” — Kirkus Reviews (starred review)

“This is a spell-binding book. It is not often that all three books in a series are equally enthralling. Those who love Tamora Pierce and Kristen Cashore will love the tales of Elisa.” — Voice of Youth Advocates (VOYA)

“This is that rare series in which each volume is better than the last. … An action-packed and thoughtful end to an ambitious series.” — Horn Book Magazine

“Elisa continues to be a heroine worth rooting for … and by the fairy-tale ending, readers will have no doubt that her newly formed empire will thrive. … An altogether satisfying conclusion to an entertaining trilogy.” — School Library Journal

This feature require that you enable JavaScript in your browser.
END_OF_DOCUMENT_TOKEN_TO_BE_REPLACED

END_OF_DOCUMENT_TOKEN_TO_BE_REPLACED

This feature require that you enable JavaScript in your browser.
END_OF_DOCUMENT_TOKEN_TO_BE_REPLACED