The Orchardist: A Novel (Paperback) 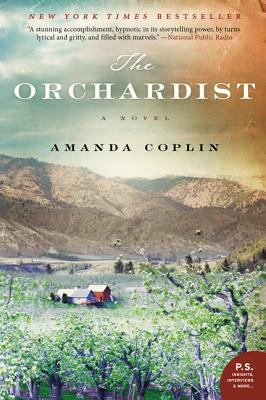 At once intimate and epic, The Orchardist is historical fiction at its best, in the grand literary tradition of William Faulkner, Marilynne Robinson, Michael Ondaatje, Annie Proulx, and Toni Morrison.

In her stunningly original and haunting debut novel, Amanda Coplin evokes a powerful sense of place, mixing tenderness and violence as she spins an engrossing tale of a solitary orchardist who provides shelter to two runaway teenage girls in the untamed American West, and the dramatic consequences of his actions.

“Many contemporary novelists have revisited the question of what constitutes a family, but few have responded in a voice as resolute and fiercely poetic.” — New York Times Book Review

“Amanda Coplin’s somber, majestic debut arrives like an urgent missive from another century. You can only be thrilled by a 31-year-old writer with this depth of understanding…the final epiphany equals in stark grandeur similar scenes in Emily Bronte’s WUTHERING HEIGHTS and Pat Barker’s ANOTHER WORLD...” — Washington Post

“[A] beautiful, powerful novel…THE ORCHARDIST has the sweep and scope of a big historical novel…yet Coplin is exquisitely attuned to small, interior revolutions as well. Its language as rooted and plain as the apple trees Talmadge nurtures, this is a gorgeous first book.” — Boston Globe

“There are echoes of John Steinbeck in this beautiful and haunting debut novel set in early-20th -century Washington State...Coplin depicts the frontier landscape and the plainspoken characters who inhabit it with dazzling clarity.” — Entertainment Weekly

“A stunning debut…THE ORCHARDIST is a poetic book, but its strength doesn’t lie solely in its language. Coplin’s understanding of abuse and the lasting effects of fear and loss on the individual psyche are deeply resonant. As a debut novel, THE ORCHARDIST stands on par with Charles Frazier’s COLD MOUNTAIN.” — The Oregonian (Portland)

“Coplin’s prose is fresh and compelling…While the ending of this striking debut may not make every reader happy, it is, undoubtedly, the right one for both the book and for Talmadge, an unlikely hero who—like the book—is true to life and sweetly honest from beginning to end.” — Minneapolis Star Tribune

“THE ORCHARDIST is engaging and enthralling. The reader wants to turn each page quickly as the story develops, and wants at the same time to dwell on the lyrical moments of sunshine, soil and love.” — Seattle Times

“Amanda Coplin has depicted her northwestern landscape with such fidelity that readers will know its every sight, smell, and sound. Within this world are compelling characters and their equally compelling stories. THE ORCHARDIST is an outstanding debut.” — Ron Rash, New York Times bestselling author of SERENA and THE COVE

“To read this mysterious, compelling, elemental novel is to immerse yourself in the world of an old folk song, in which the passions and sorrows of plain people rage unseen and then blossom as madly (and quietly) as apricot trees. In THE ORCHARDIST, Amanda Coplin shows us what’s unknowable.” — Bonnie Jo Campbell, author of National Book Award and NBCC Award Finalist for Fiction, AMERICAN SALVAGE

“THE ORCHARDIST is a stunning accomplishment, hypnotic in its storytelling power, by turns lyrical and gritty, and filled with marvels. Coplin displays a dazzling sense of craftsmanship, and a talent for creating characters vivid and true.” — Jane Ciabattari, NPR

“A breathtaking work from a genuinely accomplished writer…Coplin’s lyrical style and forceful storytelling provide many unexpected twists before the poignant conclusion.” — Library Journal

“Coplin’s mesmerizing debut stands out with its depictions of uniquely Western personalities and a stark, gorgeously realized landscape that will settle deeply into readers’ bones.” — Booklist

“Beautifully written, so alive to the magnificence of the land and the intricate mysteries of human nature, that it inspires awe rather than depression.” — Kirkus Reviews (starred review)

“Nearly everybody in the book compels your admiration, either for their courage or for the heavy work they do, all the time and without complaint, even when wicked men are hunting them. Transfixing. I love this book straight through.” — Salvatore Scibona, author of THE END, National Book Award Finalist

“When you pick up THE ORCHARDIST, you will be lured at first by the lushness of the language. But soon enough the characters will take hold of you and you’ll read on hungrily, as if under a spell. It’s hard to believe that this is Amanda Coplin’s first novel.” — Wally Lamb, New York Times bestselling author of THE HOUR I FIRST BELIEVED

“Patiently beautiful, THE ORCHARDIST builds its characters and its situations so carefully that the story becomes as real to us as this morning’s news. I am in awe of Amanda Coplin’s book, which does not feel like a first novel but a life’s work.” — Charles Baxter, author THE FEAST OF LOVE, National Book Award Finalist

“A rare find—this debut novel that reads with masterful authority. Stately and passionate—a stunning powerhouse. THE ORCHARDIST, like Marilynne Robinson’s GILEAD, drills into history, portraying an apparently modest American way of life but finally presenting us with a great American elegy.” — Patricia Hampl, author of A ROMANTIC EDUCATION

“This is a novel to burrow into, to be submerged in a world that is both lovely and hard. It’s a world that becomes so real that one only leaves by being forced out by the closing of the covers that enfold it.” — Denver Post

“Coplin’s grave, graceful prose gives dignity to lives that otherwise might be too sad to contemplate. Her story, which turns in unpredictable ways, is both troubling and touching.” — Columbus Dispatch

“In the end, THE ORCHARDIST shares much in common with the fruits its protagonist nurtures: The succulent flesh of the novel will intoxicate readers early on, but delving deeper reveals a hard core that is vital, bittersweet and ultimately timeless.” — BookPage, Top Fiction Pick

“This is an extraordinarily ambitious and authoritative debut.” — Holloway McCandless, Shelf Awareness

“Coplin’s consistent and finely-tuned rendering of a very different sensibility may help readers to comprehend a time when expedience did not rule…This patience is revealed in a narrative that is at once lyrical and unsentimental. This is the most extraordinary fruit of a noteworthy debut novel.” — Bellingham Herald

“The exquisitely described landscapes in this tale astonish, but so do the emotional lives of its characters…a wise and great American novel.” — The Oprah Blog, Book of the Week September 17th

“...the best first novel of 2012...the book brings to mind just how much the effect of reading about the land, the setting, with its lyric pulse, plays a role in the success of a forward moving narrative.” — Chicago Tribune

This feature require that you enable JavaScript in your browser.
END_OF_DOCUMENT_TOKEN_TO_BE_REPLACED

END_OF_DOCUMENT_TOKEN_TO_BE_REPLACED

This feature require that you enable JavaScript in your browser.
END_OF_DOCUMENT_TOKEN_TO_BE_REPLACED