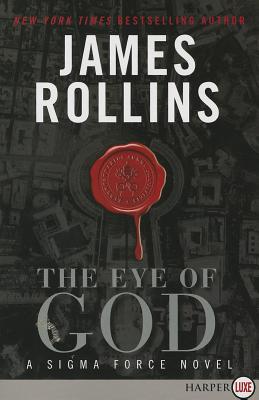 This is book number 8 in the Sigma Force Novels series.

In The Eye of God, a Sigma Force novel, New York Times bestselling author James Rollins delivers an apocalyptic vision of a future predicted by the distant past.

In the wilds of Mongolia, a research satellite has crashed, triggering an explosive search for its valuable cargo: a code-black physics project connected to the study of dark energy—and a shocking image of the eastern seaboard of the United States in utter ruin.

At the Vatican, a package arrives containing two strange artifacts: a skull scrawled with ancient Aramaic and a tome bound in human skin. DNA evidence reveals that both came from the same body: the long dead Mongol king Genghis Khan.

Commander Gray Pierce and Sigma Force set out to discover a truth tied to the fall of the Roman Empire, to a mystery going back to the birth of Christianity, and to a weapon hidden for centuries that holds the fate of humanity.

“James Rollins is a master of international action and intrigue.” — Richmond Times-Dispatch

“James Rollins is clearly at the top of his game.” — Steve Berry

“Rollins is one of the most inventive storytellers writing today.” — Lincoln Child

“Rollins does his job: thrills promised, then delivered.” — Tampa Tribune

“Rollins combines real-world science with high-octane action to create rousing stories of adventure that are as exciting as any movie.” — Chicago Sun-Times

” . . . this is your summer beach read writ large.” — New York Journal of Books on THE EYE OF GOD

“Rollins has done it again. Real history and science play a key role in all of the action, which never wanes. Amid all of the chaos are some terrific characters who get a chance to shine. Definitely keep an eye out for this one.” — Library Journal (starred review) on THE EYE OF GOD

This feature require that you enable JavaScript in your browser.
END_OF_DOCUMENT_TOKEN_TO_BE_REPLACED

END_OF_DOCUMENT_TOKEN_TO_BE_REPLACED

This feature require that you enable JavaScript in your browser.
END_OF_DOCUMENT_TOKEN_TO_BE_REPLACED