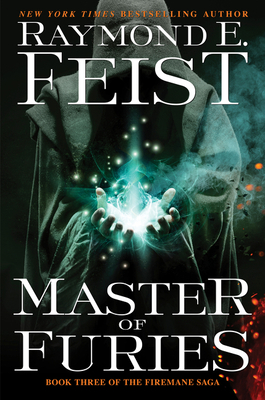 This is book number 3 in the Firemane Saga, The series.

War has swept across Marquensas. Ruthless raiders have massacred the inhabitants of Beran’s Hill, including Gwen, the beloved wife of Declan Smith. Hollow of heart, his hopes burned to ashes, Declan swears to track down and destroy the raiders, an ambition shared by Baron Daylon Dumarch, whose family was massacred as they fled the capital.

Meanwhile Hava, whose gift for piracy has seen her acquire the treasure ship Borzon’s Black Wake and the swift Azhante sailing vessel, Queen of Storms, and won her the name of “the Sea Demon,” is closing in on the whereabouts of those who unleashed the murderous hordes.

Her husband, Hatushaly, the last remaining member of the ruling family of Ithrace, the legendary Firemanes, seeks to control the magical powers he has inherited. He is able now to visualize and even travel among the filaments of energies that power all existence: the furies. But will he be able to channel his magic in time to combat the deepest, darkest threat the world of Garn has ever faced?

Raymond E. Feist is the author of more than thirty previous books, including the internationally bestselling “Riftwar Cycle” of novels set in his signature world of Midkemia, as well as a standalone novel, Faerie Tale. The Firemane Saga is his first all-new epic fantasy series. He lives in San Diego, California.

"A delightful wrap-up to the epic saga." — Booklist

"This is a true hero’s journey. . . . I had unbelievably high expectations for Master of Furies and I’m so glad it lived up to them. With [Feist's] signature worldbuilding and masterful storytelling, this is sure to quench your epic fantasy thirst." — Booktopia

“Feist displays his mastery of epic fantasy in this impressive second installment to the Firemane Saga… Feist fans will recognize his hallmarks here—quiet moments of a common life interrupted by sweeping battles, and high seas journeys to distant continents. Fantasy readers of all sorts will appreciate his command of both subtle characterization and vast, panoramic story. This is a knockout.” — Publishers Weekly (starred review) on Queen of Storms

“Master storyteller Feist takes time to develop the complex relationships among his many characters as he continues to expand the world in the second epic book of the Firemane series.” — Booklist on Queen of Storms

“A hard-hitting, heartbreaking second novel of The Firemane Saga…Feist takes us on a wild and perilous ride with his characters.” — Grimdark Magazine on Queen of Storms

“If you have ever read anything from this master storyteller, you will know that tragedy and conflict is where Feist really shines. When the inevitable happens and everyone’s peaceful existence begins to crumble around them, each character’s story progresses in such a way as to be logical but exciting, nonetheless.” — The Nerd Daily on Queen of Storms

“Feist is back on top of his game in this series. . . A delightful fantasy novel, full of simple magic, fighting, political intrigue, and religious strife.” — Booklist (starred review) on King of Ashes

This feature require that you enable JavaScript in your browser.
END_OF_DOCUMENT_TOKEN_TO_BE_REPLACED

END_OF_DOCUMENT_TOKEN_TO_BE_REPLACED

This feature require that you enable JavaScript in your browser.
END_OF_DOCUMENT_TOKEN_TO_BE_REPLACED