10% Human: How Your Body's Microbes Hold the Key to Health and Happiness (Paperback) 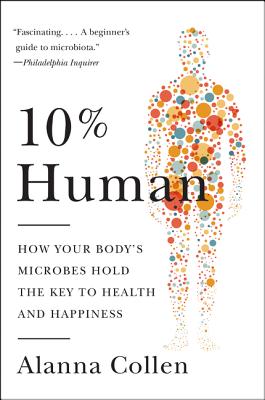 You are just 10% human. For every one of the cells that make up the vessel that you call your body, there are nine impostor cells hitching a ride. You are not just flesh and blood, muscle and bone, brain and skin, but also bacteria and fungi. Over your lifetime, you will carry the equivalent weight of five African elephants in microbes. You are not an individual but a colony.

Until recently, we had thought our microbes hardly mattered, but science is revealing a different story, one in which microbes run our bodies; remaining a healthy human is impossible without them.

In this riveting, shocking, and beautifully written book, biologist Alanna Collen draws on the latest scientific research to show how our personal colony of microbes influences our weight, immune system, mental health, and even our choice of partner. She argues that so many of our modern diseases—obesity, autism, mental illness, digestive disorders, allergies, autoimmune afflictions, and even cancer—have their root in our failure to cherish our most fundamental and enduring relationship: that with our individual colony of microbes.

The good news is that unlike our human cells, we can change our microbes for the better. Life—and your body—will never seem the same again.

Alanna Collen is a science writer with a master's degree in biology from Imperial College London and a PhD in evolutionary biology from University College London and the Zoological Society of London. She is a well-travelled zoologist, an expert in bat echolocation, and an accidental collector of tropical diseases. During her scientific career, Collen has written for the Sunday Times Magazine, as well as about wildlife for ARKive.org. She has appeared on both radio and television, including BBC Radio 4's The Tribes of Science and Saturday Live, and BBC One's adventure-wildlife show Lost Land of the Volcano. She lives in Bedfordshire, England, with her husband.

“A fascinating look into the world of the microbiological hitchhikers that travel with us throughout our lives…Recommended for all readers, particularly those contending with the diseases listed and parents making health choices for their children that may have far-reaching consequences.”
— Library Journal (starred review)

“Exciting and novel…A fascinating study of the intertwined lives of microbes and humans…a manual for the new, healthy way of being dirty…Read it, and you will learn to love your microbiota.”
— Newsweek

“A fascinating subject to consider…A beginner’s guide to microbiota…There’s value in Collen’s point about reconsidering what is truly healthy at a time when healthy living is so in vogue.”
— Philadelphia Inquirer

“Collen’s evidence for how each person’s microbiota, or personal community of microbes, impacts his or her health is undeniably powerful. She creates compelling connections between microbes and the “twenty-first-century illnesses” that affect all of us in some way…”
— Bustle

“A welcome antidote to the simplistic ‘boost your health with probiotics’ books and articles posing as science…fascinating…Collen always brings the story back to the human level…Everything you wanted to know about microbes but were afraid to ask.”
— Kirkus Reviews (starred review)

“Collen argues convincingly that our enthusiasm for killing human bacteria is playing a leading role in ailments ranging from immune problems and obesity to autism.”
— The Listener, the 100 Best Books of the 2015

“Compelling…Packed with extensive research and interviews, with insights hidden like gems in the text… Adept at explaining complex topics like the workings of immune system cells, Collen is strong on biological and historical context for each point.”
— Gut Microbiota Worldwatch

“Collen’s book satisfies on every level… 10% Human is a page-turner that will leave science-loving readers wishing for more.”
— The ASCO Post

“This book was a mind-changer for me, but it has a moderate tone that will appeal to skeptics and believers alike. Please, please read this book. It will make you smarter about your own health, your children’s health and the sociology of human illness.”
— Leeannesowel.com

“Fascinating… I like 10% Human because while talking to an incredibly specific topic, it highlights the wholeness of the whole. It reminds me that no matter how specific we get with anything-it’s always part of a bigger picture.”
— Actionable Books

This feature require that you enable JavaScript in your browser.
END_OF_DOCUMENT_TOKEN_TO_BE_REPLACED

END_OF_DOCUMENT_TOKEN_TO_BE_REPLACED

This feature require that you enable JavaScript in your browser.
END_OF_DOCUMENT_TOKEN_TO_BE_REPLACED