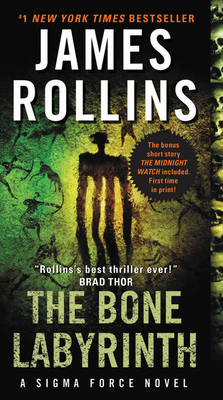 This is book number 10 in the Sigma Force Novels series.

A war is coming, a battle that will stretch from the prehistoric forests of the ancient past to the cutting-edge research labs of today, all to reveal a true mystery buried deep within our DNA, a mystery that will leave readers changed forever . . .

In this groundbreaking masterpiece of ingenuity and intrigue that spans 50,000 years in human history, New York Times bestselling author James Rollins takes us to mankind’s next great leap.

But will it mark a new chapter in our development . . . or our extinction?

In the remote mountains of Croatia, an archaeologist makes a strange discovery:  a subterranean Catholic chapel, hidden for centuries, holds the bones of a Neanderthal woman. In the same cavern system, elaborate primitive paintings tell the story of an immense battle between tribes of Neanderthals and monstrous shadowy figures. Who is this mysterious enemy depicted in these ancient drawings and what do the paintings mean?

Before any answers could be made, the investigative team is attacked, while at the same time, a bloody assault is made upon a primate research center outside of Atlanta. How are these events connected? Who is behind these attacks?  The search for the truth will take Commander Gray Pierce of Sigma Force 50,000 years into the past. As he and Sigma trace the evolution of human intelligence to its true source, they will be plunged into a cataclysmic battle for the future of humanity that stretches across the globe . . . and beyond.

With the fate of our future at stake, Sigma embarks on its most harrowing odyssey ever—a breathtaking quest that will take them from ancient tunnels in Ecuador that span the breadth of South America to a millennia-old necropolis holding the bones of our ancestors. Along the way, revelations involving the lost continent of Atlantis will reveal true mysteries tied to mankind’s first steps on the moon. In the end, Gray Pierce and his team will face to their greatest threat: an ancient evil, resurrected by modern genetic science, strong enough to bring about the end of man’s dominance on this planet.

Only this time, Sigma will falter—and the world we know will change forever.

“[Rollins] is what you might end up with if you tossed Michael Crichton and Dan Brown into a particle accelerator together.” — New York Times Book Review

“Infused with Rollins’s trademark blend of cutting-edge science and hidden history, THE BONE LABYRINTH weaves together a bevy of seemingly disparate elements into a thrilling and cohesive tapestry like few others can. ” — The Strand Magazine

“An altogether satisfying techno-thriller.” — Kirkus Reviews on THE BONE LABYRINTH

“Rollins knows just how to balance the science and history with the ongoing action.” — Publishers Weekly on THE BONE LABYRINTH

“The Bone Labyrinth blends intense action with thrilling plots that are sprinkled with interesting historical and/or scientific facts. A fabulous adventure that is heart wrenching and action packed.” — blackfive.net on THE BONE LABYRINTH

“The only guarantee you get when you pick up a James Rollins novel is that almost any crazy thing can happen inside.” — Fort Worth Star-Telegram on THE BONE LABYRINTH

This feature require that you enable JavaScript in your browser.
END_OF_DOCUMENT_TOKEN_TO_BE_REPLACED

END_OF_DOCUMENT_TOKEN_TO_BE_REPLACED

This feature require that you enable JavaScript in your browser.
END_OF_DOCUMENT_TOKEN_TO_BE_REPLACED