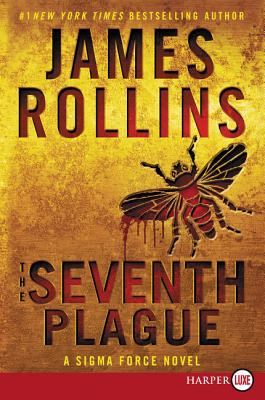 This is book number 12 in the Sigma Force Novels series.

If the biblical plagues of Egypt truly happened—could they happen again—on a global scale?

Two years after vanishing into the Sudanese desert, the leader of a British archeological expedition, Professor Harold McCabe, comes stumbling out, but he dies before he can tell his story. The mystery deepens when an autopsy uncovers a bizarre corruption: someone had begun to mummify the professor’s body—while he was still alive.

Professor McCabe had vanished while searching for proof of the ten plagues of Moses. And when the medical team who performed the man’s autopsy falls ill with an unknown disease, a disturbing question arises.

Are those plagues starting again?

Seeking answers, Commander Grayson Pierce and Sigma Force travel from the plague-ridden streets of Cairo, to an ancient tomb buried under the sands of the Sudan, to a remote Arctic engineering complex housing a mad genius. But time is running out to confront a threat born of the ancient past and made real by the latest science—a danger that will unleash a cascading series of plagues, culminating in a scourge that could kill all of the world’s children . . . decimating mankind forever.

“When it comes to the blending of action, adventure, history, and science, there is no other author who does it better than Rollins. Fans of Clive Cussler, Steve Berry, and Michael Crichton should already have Rollins on their mandatory reading list.” — Booklist (starred review)

This feature require that you enable JavaScript in your browser.
END_OF_DOCUMENT_TOKEN_TO_BE_REPLACED

END_OF_DOCUMENT_TOKEN_TO_BE_REPLACED

This feature require that you enable JavaScript in your browser.
END_OF_DOCUMENT_TOKEN_TO_BE_REPLACED