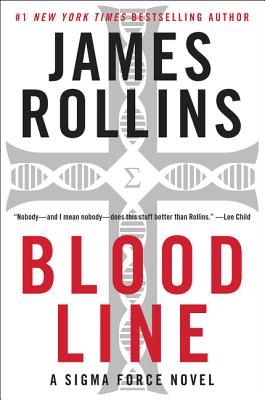 This is book number 7 in the Sigma Force Novels series.

#1 New York Times Bestselling Author
In a thrilling masterwork that will make you rethink your perceptions of life and death, #1 New York Times bestselling author James Rollins takes you to the edge of medicine, genetics, and technology, revealing the next evolutionary leap forward: immortality

Galilee, 1025: A Templar knight uncovers a holy treasure in an ancient citadel—a priceless icon that holds a mysterious and terrifying power.

A millennium later, Commander Gray Pierce of Sigma Force is dispatched to the African jungle, teaming up with former Army Ranger Captain Tucker Wayne and his military war dog, Kane, on a covert mission to rescue the U.S. President’s pregnant daughter from Somali pirates. But Pierce fears the kidnapping masks a far more terrible terrorist agenda—a suspicion proven true in a fiery ambush and a deadly act of betrayal...and by the firebombing of a South Carolina fertility clinic half a world away.

Suddenly Gray Pierce and Sigma Force are in a frantic race to save an innocent unborn baby whose very existence raises questions about the nature of humanity. And behind it all is a deadly cabal that has been manipulating events from the shadows throughout history…and a devastating conspiracy rooted in human genetic code that Pierce must expose before it alters humanity forever.

“James Rollins is a master of international action and intrigue.” — Richmond Times-Dispatch

“Rollins combines real-world science with high-octane action to create rousing stories of adventure that are as exciting as any movie.” — Chicago Sun-Times

“From the hidden Indian treasure, to the Fort Knox secrets, to the conspiracy at the beginning of the United States The Devil Colony gives you every reason why you’ll want to be a member of Sigma Force.” — Brad Meltzer, New York Times bestselling author of The Inner Circle on The Devil Colony

“Riveting....Rollins gets better with each book, and his position at the top of this particular subgenre remains unshaken.” — Publishers Weekly on The Devil Colony

This feature require that you enable JavaScript in your browser.
END_OF_DOCUMENT_TOKEN_TO_BE_REPLACED

END_OF_DOCUMENT_TOKEN_TO_BE_REPLACED

This feature require that you enable JavaScript in your browser.
END_OF_DOCUMENT_TOKEN_TO_BE_REPLACED