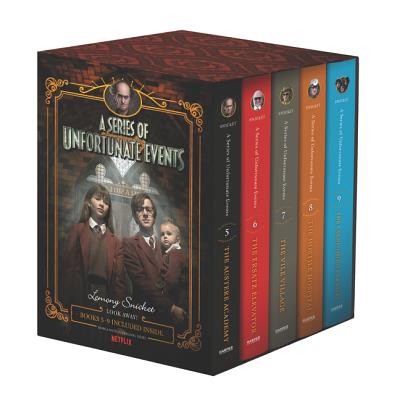 Don’t be fooled by the new, Netflix-inspired book covers of the second five books in this New York Times bestselling series.

The events recounted in this five-book box set (which includes The Austere Academy, The Ersatz Elevator, The Vile Village, The Hostile Hospital, and The Carnivorous Carnival) are sure to depress you. If you cannot stomach stories that find misfortune continuously befalling the three charming Baudelaire orphans, I recommend you make another reading selection.

Some boxes should never be opened.

This feature require that you enable JavaScript in your browser.
END_OF_DOCUMENT_TOKEN_TO_BE_REPLACED

END_OF_DOCUMENT_TOKEN_TO_BE_REPLACED

This feature require that you enable JavaScript in your browser.
END_OF_DOCUMENT_TOKEN_TO_BE_REPLACED