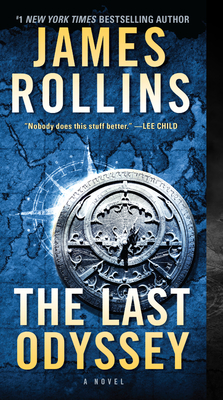 This is book number 15 in the Sigma Force Novels series.

“One of the world’s best storytellers.”

For eons, the city of Troy—whose legendary fall was detailed in Homer’s Iliad—was believed to be myth, until archaeologists in the nineteenth century uncovered its ancient walls buried beneath the sands. If Troy was real, how much of Homer’s twin tales of gods and monsters, curses and miracles—The Iliad and The Odyssey—could also be true and awaiting discovery?

In the frozen tundra of Greenland, a group of modern-day researchers stumble on a shocking find: a medieval ship buried a half-mile below the ice. The ship’s hold contains a collection of artifacts—tools of war—dating back to the Bronze Age. Inside the captain’s cabin is a clockwork gold map imbedded with an intricate silver astrolabe. Once activated, the moving map traces the path of Odysseus’s famous ship as it sailed away from Troy. But the route detours as the map opens to reveal a fiery river leading to a hidden realm underneath the Mediterranean Sea—the subterranean world of Tartarus, the Greek name for Hell.

When word of Tartarus spreads, the phantasmagoric horrors found in Homer’s tales are all too real—and whoever possesses them can use their awesome power to control the future of humanity.

Now, Sigma Force must prevent a tyrant from igniting a global war and cross the very gates of Hell.

“[Rollins] is what you might end up with if you tossed Michael Crichton and Dan Brown into a particle accelerator together.”

"Nobody does this stuff better." — Lee Child

“As with his previous novels, Crucible is a top notch ‘science fiction’ thriller which will take the reader on a terrific and terrifying ride.” — Iron Mountain Daily News

“Rollins’ latest Sigma Force novel is one of the best in the series....The mix of science, history, and high-concept adventure is always first-rate in a Rollins novel....Devotees of Clive Cussler and Steve Berry are no doubt reading Rollins already, but if they’re not, what’s keeping them?” — Booklist (starred review) on The Demon Crown

“Impossible to put down and impossible to separate the well-researched facts from the masterfully written fiction. The Bone Labyrinth will remind you why you fell in love with reading. This book is that good!” — Brad Thor

This feature require that you enable JavaScript in your browser.
END_OF_DOCUMENT_TOKEN_TO_BE_REPLACED

END_OF_DOCUMENT_TOKEN_TO_BE_REPLACED

This feature require that you enable JavaScript in your browser.
END_OF_DOCUMENT_TOKEN_TO_BE_REPLACED