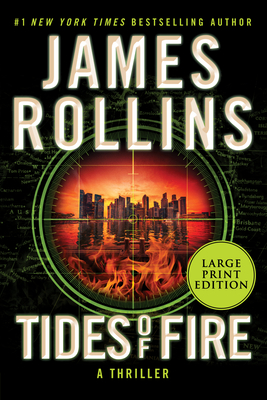 This is book number 23 in the Sigma Force Novels series.

In the latest riveting thriller from the #1 New York Times bestselling author, an international research station in the Coral Sea comes under siege during a geological disaster that triggers massive quakes, deadly tsunamis, and volcanic eruptions. To stop the world from burning, it’s up to Sigma Force to uncover a secret buried at the heart of our planet.

The Titan Project—an international research station off the coast of Australia—discovers a thriving zone of life in an otherwise dead sea. The area teems with a strange bioluminescent coral that defies science, yet holds great promise for the future. But the loss of a military submarine in the area triggers a brutal attack and sets in motion a geological disaster that destabilizes an entire region.

Massive quakes, volcanic eruptions, and deadly tsunamis herald a greater cataclysm to come—for something is stirring miles under the ocean, a threat hidden for millennia.

As seas turn toxic and coastlines burn, can Sigma Force stop what has been let loose—especially as an old adversary returns, hunting them and thwarting their every move? For any hope of success, Commander Gray Pierce must search for a key buried in the past, hidden deep in Aboriginal mythology. But what Sigma could uncover is even more frightening—something that will shake the very foundations of humanity.

“Exhilarating…Fans of Clive Cussler and Michael Crichton won’t want to miss this one.”  — Publishers Weekly (starred review) on Kingdom of Bones

“The Sigma Force novels (this is the sixteenth) are muscular, dynamic action-adventures. But this doesn’t mean they skimp on character: Rollins knows just when to slow things down and let us get to know the players. He’s very good at this sort of thing, and his fans will surely be lining up for this one.”  — Booklist on Kingdom of Bones

“After reading a James Rollins book, you come away not only exhilarated but having learned some valuable information in the process. Some have called him a successor to the late great Michael Crichton, and nowhere is this more evident than in Kingdom of Bones… Full of scientific adventure…extremely frightening…[Rollins] has transformed the subject matter into high-octane fiction that is impossible to put down or forget.” — Book Reporter

“Science fiction and archaeology have had a long relationship. The link is a conviction that there is a hidden truth in the relics of dead civilizations…and that this can be uncovered by what we now know about science… The dominant figure in this area of fiction right now is James Rollins.” — Wall Street Journal

This feature require that you enable JavaScript in your browser.
END_OF_DOCUMENT_TOKEN_TO_BE_REPLACED

END_OF_DOCUMENT_TOKEN_TO_BE_REPLACED

This feature require that you enable JavaScript in your browser.
END_OF_DOCUMENT_TOKEN_TO_BE_REPLACED