Girls of Flight City: Inspired by True Events, a Novel of WWII, the Royal Air Force, and Texas (Paperback) 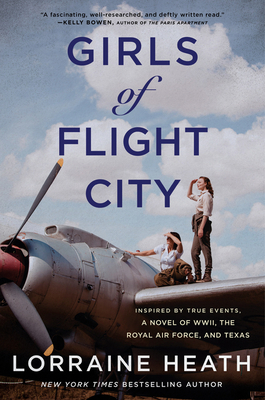 1941. A talented flier, Jessie Lovelace yearns for a career in aviation. When the civilian flight school in her small Texas town begins to clandestinely train British pilots for the RAF, she fights to become an instructor. But the task isn’t without its perils of near-misses and death. Faced with the weight of her responsibilities, she finds solace with a British officer who knows firsthand the heavy price paid in war . . . until he returns to the battles he never truly left behind.

Rhonda Monroe might not be skilled in the air but can give a trainee a wild ride in a flight simulator. Fearing little, she dares to jeopardize everything for a forbidden relationship with a charismatic airman…

Innocent and fun-loving Kitty Lovelace, Jessie's younger sister, adores dancing with these charming newcomers, realizing too late the risks they pose to her heart.

As the war intensifies and America becomes involved, the Girls of Flight City do their part to bring a victorious end to the conflict, pouring all their energy into preparing the young cadets to take to the skies and defeat the dangers that await. And lives from both sides of the Atlantic will be forever changed by love and loss…

When multiple New York Times bestselling author Lorraine Heath received her BA degree in psychology from the University of Texas, she had no idea she had gained a foundation that would help her create believable characters—characters often described as “real people.” The daughter of a British beauty and a Texan stationed at RAF Bovingdon, Lorraine was born in England but soon after moved to Texas. Her dual nationality has given her a love for all things British and Texan, and she enjoys weaving both heritages through her stories.

"Girls of Flight City takes a little-known bit of World War II history from a small Texas town and creates a heart-warming story about the power of connection. This is a wonderful story about love, hope, sacrifice, and finding community in unexpected places." — Elise Hooper, author of Fast Girls

"In Girls of Flight City, Lorraine Heath delivers a touching tale of the WWII home front. The story of the women who trained RAF pilots in Texas before the US entry into the war shows the sacrifice and dedication of the brave women called to serve their cause. With vibrant characters and gripping action sequences, Girls of Flight City is a sure to be a favorite with fans of WWII fiction. A well-researched pleasure to read.”
— Aimie K. Runyan, bestselling author of Daughters of the Night Sky and Across the Winding River

"Girls of Flight City is an engaging, inspiring story crafted from the real history of a small Texas town during World War II. The women who broke through barriers and trained RAF pilots before the events of Pearl Harbor did so with courage, sacrifice, love, and friendship, and Girls of Flight City immerses the reader into their lives every step of the way. A fascinating, well-researched, and deftly-written read." — Kelly Bowen, author of The Paris Apartment

"Perfectly balancing tragedy and triumph, Heath's latest gives readers a war romance that keeps the pages turning. With this unique take on a WWII tale, best-selling romance author Heath's first foray into women's fiction is bound to attract her legion of fans and some new ones as well." — Booklist

"Heath’s magnetic narrative pulls readers in with its depiction of Jessie’s complicated love life and determination to overcome the limitations placed on her gender. With this riveting story, Heath makes a successful pivot from romance to historical fiction.” — Publishers Weekly

“The author’s talent for chemistry is as bold as the fireworks that explode in the first chapter.”  — Kirkus Reviews

“One of the legends of historical romance.” — NPR

This feature require that you enable JavaScript in your browser.
END_OF_DOCUMENT_TOKEN_TO_BE_REPLACED

END_OF_DOCUMENT_TOKEN_TO_BE_REPLACED

This feature require that you enable JavaScript in your browser.
END_OF_DOCUMENT_TOKEN_TO_BE_REPLACED