I'm Your Man: The Life of Leonard Cohen (Paperback) 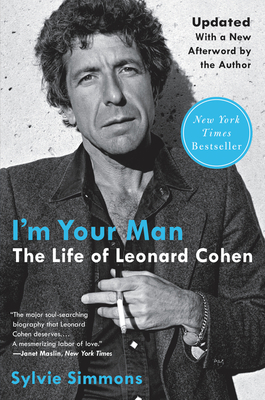 “There is a crack in everything.

That’s how the light gets in.”

The genius behind such classic songs as Suzanne, Bird on a Wire, and Hallelejuia, Leonard Cohen was one of the most important and influential songwriters of our time, a man of spirituality, emotion, and intelligence whose work explored the definitive issues of human life—sex, religion, power, meaning, love.

Yet before he even began recording, Cohen was an accomplished literary figure whose. poetry and novels brought him considerable recognition. His dual careers in music and literature have transformed one other, his songs revealing a literary quality rare in the world of popular music, and his poetry and prose informed by a rich musicality.

I’m Your Man explores the facets of Cohen’s life—from his early childhood in Montreal, to his entrée into the worlds of literature and music, his immersion in Jewish culture, obsession with Christian imagery, and deep commitment to Buddhist detachment—including the five years he spent at a monastery outside of Los Angeles and his ordainment as a Rinzai Zen Buddhist Monk—offering remarkable insight into an artist whose reach, vision, and incredible talent has had a profound impact on multiple generations of writers, poets, musicians, artists, and everyday people.

Sylvie Simmons is an award-winning writer and one of the foremost music journalists working today. Born in London, she moved to Los Angeles in the late seventies and started writing about rock music for magazines such as Sounds, Creem, Kerrang! and Q. She is the author of acclaimed fiction and nonfiction books, including the biography Serge Gainsbourg: A Fistful of Gitanes and the short-story collection Too Weird for Ziggy. She has lived at various times in England, the United States, and France, and she currently lives in San Francisco, where she writes for MOJO magazine and plays the ukulele.

“A thoughtful celebration of the artist’s life...Simmons has deftly narrated Cohen’s evolution... In the end, this biography has the oddest effect: as soon as you finish reading it you feel an overwhelming impulse to go back and begin again, revisiting the story with what you’ve learned along the way.”
— A.M. Homes, New York Times Book Review

“This is the bio Cohen has long deserved, and it makes every prior Cohen book practically unnecessary.”
— Rolling Stone, 4 1/2 Stars

“The book is a seductive tribute to a master seducer.”
— The Onion A.V. Club

“A deep, enlightening book. . . Simmons, a music journalist and short-story writer, knows how to research and write and keep a critical distance from Cohen, who opens up some but uses his usual weapons, politeness and self-deprecation, to maintain an air of mystery.”
— The Oregonian (Portland)

“Leonard fought darkness through his work and... the light ultimately prevailed when he triumphantly toured the world for three years beginning in 2008... ‘You could hear the hairs stand up on people’s arms,’ writes Simmons of the hushed reverence of his audience. This book demands a similar reaction.”
— MOJO Magazine, 5 Stars

“This is a revelatory biography that investigates not just an artist’s life, but the life of his art.”
— Shelf Awareness

“In I’m Your Man, we see not only the life of one man who was transformed by words, but how we ourselves may be transformed by them.”
— New York Jewish Week

“Simmons’ rich, compelling and provocative book... is a star-studded but also frank account of how the music industry really works and, at the same time, a discerning portrait of one especially important musician.”
— Jewish Journal Los Angeles

This feature require that you enable JavaScript in your browser.
END_OF_DOCUMENT_TOKEN_TO_BE_REPLACED

END_OF_DOCUMENT_TOKEN_TO_BE_REPLACED

This feature require that you enable JavaScript in your browser.
END_OF_DOCUMENT_TOKEN_TO_BE_REPLACED