A Series of Unfortunate Events #8: The Hostile Hospital (Hardcover) 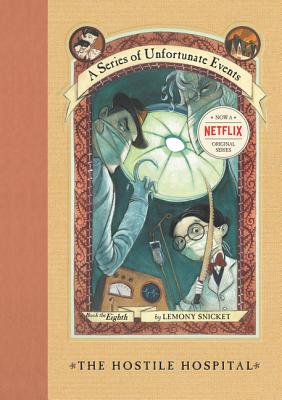 This is book number 8 in the A Series of Unfortunate Events series.

The Baudelaires need a safe place to stay—somewhere far away from terrible villains and local police. A quiet refuge where misfortune never visits. Might Heimlich Hospital be just the place?

In Lemony Snicket's eighth ghastly installment in A Series of Unfortunate Events, I'm sorry to say that the Baudelaire orphans will spend time in a hospital where they risk encountering a misleading newspaper headline, unnecessary surgery, an intercom system, anesthesia, heart-shaped balloons, and some very startling news about a fire.

This feature require that you enable JavaScript in your browser.
END_OF_DOCUMENT_TOKEN_TO_BE_REPLACED

END_OF_DOCUMENT_TOKEN_TO_BE_REPLACED

This feature require that you enable JavaScript in your browser.
END_OF_DOCUMENT_TOKEN_TO_BE_REPLACED