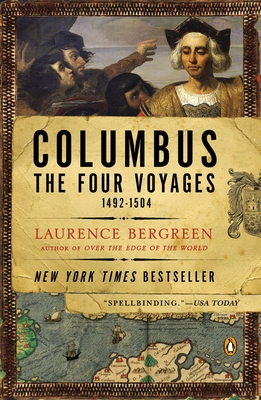 He knew nothing of celestial navigation or of the existence of the Pacific Ocean. He was a self-promoting and ambitious entrepreneur. His maps were a hybrid of fantasy and delusion. When he did make land, he enslaved the populace he found, encouraged genocide, and polluted relations between peoples. He ended his career in near lunacy. But Columbus had one asset that made all the difference, an inborn sense of the sea, of wind and weather, and of selecting the optimal course to get from A to B. Laurence Bergreen's energetic and bracing book gives the whole Columbus and most importantly, the whole of his career, not just the highlight of 1492. Columbus undertook three more voyages between 1494 and 1504, each designed to demonstrate that he could sail to China within a matter of weeks and convert those he found there to Christianity. By their conclusion, Columbus was broken in body and spirit, a hero undone by the tragic flaw of pride. If the first voyage illustrates the rewards of exploration, this book shows how the subsequent voyages illustrate the costs - political, moral, and economic.

Laurence Bergreen is the author of several award-winning biographies, including those of Louis Armstrong, Al Capone, Irving Berlin, and James Agee. He has written for many national publications including Esquire and Newsweek, taught at the New School for Social Research, and served as Assistant to the President of the Museum of Television and Radio in New York. Bergreen has also served as a nonfiction judge for the National Book Awards and as a judge for the PEN/Albrand Nonfiction Award. Bergreen lives in New York City.

"Laurence Bergreen's Columbus was brillliant, audacious, volatile, paranoid and ruthless. What emerges in this biography,  a worthy addition to  the literature on Columbus is a surprising and revealing portrait of a man who might have been the title charcater in a Shakespearan tradegy."
— The New York Times

"Laurence Bergreen's ambitious new biography, Columbus: The Four Voyages [is] a spellbinding epic that's simultaneiously a profoundly private portrait of the most complex, compelling, controversial creature ever to board a  boat. This scrupulously researched, unbiased account of four death-defying journeys to The New World reveals the Admiral's paradoxical personality."
— USA Today

"A compelling new book [that] details the explorer's trips to the New World, including three you haven't heard about."
— Salon

"Once you have read this superb acount of Columbus' four voyages, you will never be content with the cliche about the Italian-born explorer's sailing the ocean blue in 1492. Author of many prize-winning popular history books on topics as diverse as Marco Polo and Al Capone. Laurence Bergreen is a New York-based scholar whose portrayal of the life and times of Christopher Columbus is a tour de force."
— Winnipeg Free Press

"Laurence Bergreen's new book, refreshingly, is fluid in style in its style and comprehensive in its research. Richly illustrated and enhanced with maps that are as legible as they are relevant. Columbus: The Four Voyages is complex in its themes, intriguing in its substance and sparkling with suprises."
— The Washington Times

"In this scrupulously fair and often thrilling account of his four vorages to the "New World," Bergreen reveals Columbus as brilliant, brave, adventurous, and deeply flawed . . . A superb reexamination of the character and career of a still controversial historical agent." — Booklist

This feature require that you enable JavaScript in your browser.
END_OF_DOCUMENT_TOKEN_TO_BE_REPLACED

END_OF_DOCUMENT_TOKEN_TO_BE_REPLACED

This feature require that you enable JavaScript in your browser.
END_OF_DOCUMENT_TOKEN_TO_BE_REPLACED