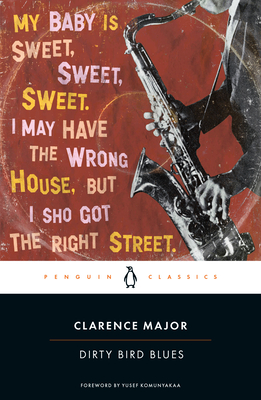 Set in post-World War II Chicago and Omaha, the novel features Manfred Banks, a young, harmonica-blowing blues singer who is always writing music in his head. Torn between his friendships with fellow musicians and nightclub life and his responsibilities to his wife and child, along with the pressures of dealing with a racist America that assaults him at every turn, Manfred seeks easy answers in "Dirty Bird" (Old Crow whiskey) and in moving on. He moves to Omaha with hopes of better opportunities as a blue-collar worker, but the blues in his soul and the dreams in his mind keep bringing him back to face himself. After a nightmarish descent into his own depths, Manfred emerges with fresh awareness and possibility. Through Manfred, we witness and experience the process by which modern American English has been vitalized and strengthened by the poetry and the poignancy of the African-American experience. As Manfred struggles with the oppressive constraints of society and his private turmoil, his rich inner voice resonates with the blues.

A painter, poet, novelist, and anthology editor, Clarence Major has written over ten volumes of poetry and seven works of fiction and edited two anthologies. He has been awarded a 2016 PEN Oakland/Reginald Lockett Lifetime Achievement Award, a 2015 "Lifetime Achievement Award in the Fine Arts" by the Congressional Black Caucus Foundation, a Fulbright Fellowship, a National Council on the Arts Fellowship, and two Pushcart Prizes, and was a National Book Award finalist. Major is a distinguished professor emeritus of twentieth century American literature at the University of California, Davis. He retired in 2007. The Essential Clarence Major was published in 2020.

Yusef Komunyakaa won the Pulitzer Prize for Poetry for Neon Vernacular. His other collections include Warhorses, Taboo, The Emperor of Water Clocks, and his most recent collection, Everyday Mojo Songs of Earth: New and Selected Poems 2001-2021. A former chancellor of the Academy of American Poets, Komunyakaa is the recipient of the 2021 Griffin Prize Lifetime Recognition Award, 2011 Wallace Stevens Award, the Ruth Lilly Poetry Prize, and the William Faulkner Prize, among other honors.

This feature require that you enable JavaScript in your browser.
END_OF_DOCUMENT_TOKEN_TO_BE_REPLACED

END_OF_DOCUMENT_TOKEN_TO_BE_REPLACED

This feature require that you enable JavaScript in your browser.
END_OF_DOCUMENT_TOKEN_TO_BE_REPLACED