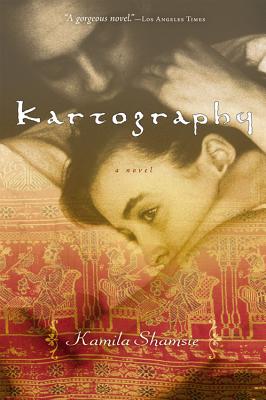 Raheen and her best friend, Karim, share an idyllic childhood in upper-class Karachi. Their parents were even once engaged to each others' partners until they rematched in what they call "the fiancée swap." But as adolescence distances the friends, Karim takes refuge in maps while Raheen searches for the secret behind her parents' exchange. What she uncovers reveals not just a family's but a country's turbulent history-and a grown-up Raheen and Karim are caught between strained friendship and fated love.

A love story with a family mystery at its heart, Kartography is a dazzling novel by a young writer of astonishing maturity and exhilarating style. Shamsie transports us to a world we have not often seen in fiction-vibrant, dangerous, sensuous Pakistan. But even as she takes us far from the familiar, her story of passion and family secrets rings universally true.

KAMILA SHAMSIE's first novel, In the City by the Sea, was shortlisted for the John Llewelyn Rhys/Mail on Sunday Prize. After her second novel, Salt and Saffron, she was named one of the Orange Futures "21 Writers for the 21st century". A recipient of the Award for Literary Achievement in Pakistan, she lives in Karachi and London, where she writes frequently for The Guardian.

PRAISE FOR KARTOGRAPHY
"[Shamsie] packs her story with the playful evidence of her highflying intelligence." —San Francisco Chronicle
"A gorgeous novel of perimeters and boundaries, of the regions-literal and figurative-in which we're comfortable moving about and those through which we'd rather not travel . . . Shamsie's wry humor infuses and quickens the narrative, leavening even the most serious scenes without detracting from their emotional weight." —Los Angeles Times
"E. M. Forster's famous plea--'only connect'--reverberates passionately throughout this forceful tale of childhood, love and the power of story-telling." —The Independent
"[In Kartography] words are used as vehicles conveying both emotions and intelligence, while at the same time - because the whole novel hinges on a secret that is hidden from the narrator—Shamsie knows that words aren't exactly everything, either." —The Guardian
"Deftly woven, provocative . . . Shamsie's blistering humor and ear for dialogue scorches through [a] whirl of whiskey and witticisms." —The Observer
"The descriptions of Karachi were so graphic I could feel the heat and the tension emanating from the pages of the book…Gripping and thought-provoking." —BBC.com
"A shimmering, quick-witted lament and love story…This is a complex novel, deftly executed and rich in emotional coloratura and wordplay." —Publishers Weekly, starred review
"[Kartography] leaves you feeling wistful and touches some place in your heart you didn't even know existed…Even though the story came to a magnificent end yet you wish [Shamsie] hadn't finished the book." —The Rumpus

"A modern-day romance in a war-ridden city, how love continues to blossom in the rubble of a devastated land."
— Booklist

"Shamsie's unique slice-of-life tale beautifully illustrates the unbreakable bonds of love and friendship that are made more durable by forgiveness." &lt;br&gt;
— curledup.com

"Described as a young Anita Desai, [Shamsie's] third book, about Karachi during the turbulent 1990s, is worth all the fuss."
— Harper's Bazaar

"Its artful uncovering of how people hide from themselves and one another echoes Arundhati Roy's The God of Small Things."
— Kirkus

"A shimmering, quick-witted lament and love story. This is a complex novel, deftly executed and rich in emotional coloratura and wordplay."
— Starred Review

"An ambitious novel that is both a love story and a commentary on the problems that have plagued Pakistan."
— Richmond Times-Dispatch

"At her best describing teeming Karachi and the love, fear and loathing it stirs in the hearts of her characters." &lt;br&gt;
— The Virginia Pilot