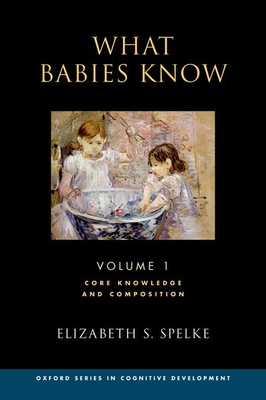 What do infants know? How does the knowledge that they begin with prepare them for learning about the particular physical, cultural, and social world in which they live? Answers to this question shed light not only on infants but on children and adults in all cultures, because the core knowledge possessed by infants never goes away. Instead, it underlies the unspoken, common sense knowledge of people of all ages, in all societies. By studying babies, researchers gain insights into infants themselves, into older children's prodigious capacities for learning, and into some of the unconscious assumptions that guide our thoughts and actions as adults. In this major new work, Elizabeth Spelke shares these insights by distilling the findings from research in developmental, comparative, and cognitive psychology, with excursions into studies of animal cognition in psychology and in systems and cognitive neuroscience, and studies in the computational cognitive sciences. Weaving across these disciplines, she paints a picture of what young infants know, and what they quickly come to learn, about objects, places, numbers, geometry, and people's actions, social engagements, and mental states. A landmark publication in the developmental literature, the book will be essential for students and researchers across the behavioral, brain, and cognitive sciences.

Elizabeth S. Spelke teaches at Harvard University, where she is the Marshall L. Berkman Professor of Psychology and a member of the Center for Brains, Minds, and Machines. After studying at Harvard (BA 1971) and Cornell Universities (PhD 1978), she taught at the University of Pennsylvania, Cornell, and MIT before moving to Harvard in 2001. She is a member of the U.S. National Academy of Sciences and the American Academy of Arts and Sciences, and a Corresponding Fellow of the British Academy of Humanities and Social Sciences. Her awards include the Distinguished Scientific Contribution Award of the American Psychological Association, the William James Award of the American Psychological Society, the Jean Nicod Prize, the IPSEN Prize in Neuronal Plasticity, the de Carvalho-Heineken Prize in Cognitive Science, the George A. Miller Prize of the Cognitive Neuroscience Society, the John P. McGovern Award of the American Academy for the Association for the Advancement of Science, theInaugural Prize in the Psychological and Cognitive Sciences of the National Academy of Sciences (now the Atkinson Prize), and honorary degrees from the Ecole Pratique des Hautes Etudes (Paris) and the Universities of Umea, Utrecht, and Paris-Descartes. She studies the origins and nature of knowledge of objects, places, and people, as well as knowledge of abstract entities such as numbers, geometric forms, mental states, and causality.

This feature require that you enable JavaScript in your browser.
END_OF_DOCUMENT_TOKEN_TO_BE_REPLACED

END_OF_DOCUMENT_TOKEN_TO_BE_REPLACED

This feature require that you enable JavaScript in your browser.
END_OF_DOCUMENT_TOKEN_TO_BE_REPLACED