Through a Glass Brightly: Using Science to See Our Species as We Really Are (Hardcover) 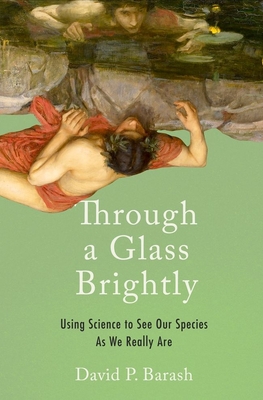 Human beings have long seen themselves as the center of the universe, the apple of God's eye, specially-created creatures who are somehow above and beyond the natural world. This viewpoint--a persistent paradigm of our own unique self-importance--is as dangerous as it is false. In Through a Glass Brightly, noted scientist David P. Barash explores the process by which science has, throughout time, cut humanity down to size, and how humanity has responded. A good paradigm is a tough thing to lose, especially when its replacement leaves us feeling more vulnerable and less
special. And yet, as science has progressed, we find ourselves--like it or not--bereft of many of our most cherished beliefs, confronting an array of paradigms lost. Barash models his argument around a set of old and new paradigms that define humanity's place in the universe. This new set of paradigms range from provocative revelations as to whether human beings are well designed, whether the universe has somehow been established with our species in mind
(the so-called anthropic principle), whether life itself is inherently fragile, and whether Homo sapiens might someday be genetically combined with other species (and what that would mean for our self-image). Rather than seeing ourselves through a glass darkly, science enables us to perceive our
strengths and weaknesses brightly and accurately at last, so that paradigms lost becomes wisdom gained. The result is a bracing, remarkably hopeful view of who we really are.

David P. Barash is an evolutionary biologist and Professor Emeritus of Psychology at the University of Washington. He has written more than 280 peer-reviewed articles and nearly 40 books. Barash has penned op-eds in the Los Angeles Times, The New York Times, and the Chicago Tribune, as well asnumerous pieces in The Chronicle of Higher Education, Nautilus, and aeon.

This feature require that you enable JavaScript in your browser.
END_OF_DOCUMENT_TOKEN_TO_BE_REPLACED

END_OF_DOCUMENT_TOKEN_TO_BE_REPLACED

This feature require that you enable JavaScript in your browser.
END_OF_DOCUMENT_TOKEN_TO_BE_REPLACED