The Last Word: The Hollywood Novel and the Studio System (Hardcover) 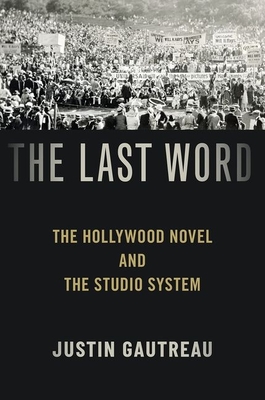 The Last Word argues that the Hollywood novel opened up space for cultural critique of the film industry at a time when the industry lacked the capacity to critique itself. While the young studio system worked tirelessly to burnish its public image in the wake of celebrity scandal, several industry insiders wrote fiction to fill in what newspapers and fan magazines left out. Throughout the 1920s and 1930s, these novels aimed to expose the invisible machinery of classical Hollywood cinema, including not only the evolving artifice of the screen but also the promotional discourse that complemented it. As likeminded filmmakers in the 1940s and 1950s gradually brought the dark side of the industry to the screen, however, the Hollywood novel found itself struggling to live up to its original promise of delivering the unfilmable. By the 1960s, desperate to remain relevant, the genre had devolved into little more than erotic fantasy of movie stars behind closed doors, perhaps the only thing the public couldn't already find elsewhere. Still, given their unique ability to speak beyond the institutional restraints of their time, these earlier works offer a window into the industry's dynamic creation and re-creation of itself in the public imagination.

Justin Gautreau is Lecturer for the Merritt Writing Program at the University of California, Merced, where he also teaches classes in film. His work has appeared in Genre and Adaptation.

This feature require that you enable JavaScript in your browser.
END_OF_DOCUMENT_TOKEN_TO_BE_REPLACED

END_OF_DOCUMENT_TOKEN_TO_BE_REPLACED

This feature require that you enable JavaScript in your browser.
END_OF_DOCUMENT_TOKEN_TO_BE_REPLACED