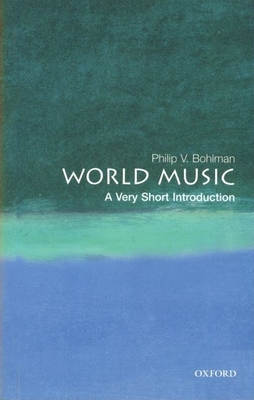 By Philip Vilas Bohlman
$11.95
Email or call for price.

World Music draws readers into a remarkable range of historical encounters, in which music had the power to evoke the exotic and to give voice to the voiceless. In the course of the volume's eight chapters the reader witnesses music's involvement in the modern world, but also the individual moments and particular histories that are crucial to an understanding of music's diversity. This book is wide-ranging in its geographical scope, yet individual chapters provide in-depth treatments of selected music cultures and regional music histories. The book frequently zooms in on repertoires and musicians--such as Bob Marley, Dana International, Bartok, and Nusrat Fateh Ali Khan--and attempts to account for world music's growing presence and popularity at the beginning of the twenty-first century.

Philip V. Bohlman, Professor of Music and Jewish Studies at the University of Chicago, has taught and published from an exceptionally broad range of topics in today's world musics: folk and ethnic music in the USA; the musics of European minorities and refugees; the Middle East and South Asia; the ideological and political dimensions of music in nationalism and racism. He is the 1997 recipient of the Royal Music Academy's Dent Medal, and Bohlman has written, edited, or co-edited seventeen books.

This feature require that you enable JavaScript in your browser.
END_OF_DOCUMENT_TOKEN_TO_BE_REPLACED

END_OF_DOCUMENT_TOKEN_TO_BE_REPLACED

This feature require that you enable JavaScript in your browser.
END_OF_DOCUMENT_TOKEN_TO_BE_REPLACED