The Third Reich's Elite Schools: A History of the Napolas (Hardcover) 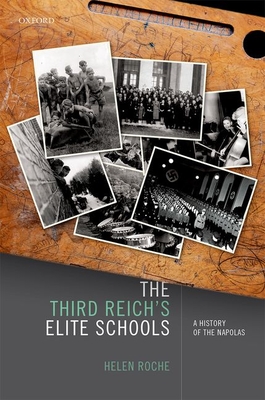 Drawing on material from eighty archives in six different countries worldwide, as well as eyewitness testimonies from over 100 former pupils, Helen Roche presents the first comprehensive history of the Third Reich's most prominent elite schools, the National Political Education Institutes (Napolas / NPEA). The Napolas provided an all-encompassing National Socialist 'total education', featuring ideological indoctrination, premilitary training, and a packed programme of extracurricular activities, including school trips and exchanges throughout Europe and beyond. Combining all the most seductive elements of reform-pedagogy, youth-movement traditions, and the militaristic ethos of the Prussian cadet schools, the schools took pupils from the age of ten, aiming to train them for leadership roles in all walks of life. Those who successfully passed the gruelling entrance examination, which tested applicants' physical prowess, courage, and alleged 'racial purity' along with their academic abilities, had to learn to live in a highly militarized and enclosed boarding-school community. Through an in-depth depiction of everyday life at the Napolas, as well as systematic analysis of the ways in which different schools within the NPEA system were shaped by their previous traditions, this study sheds light on the qualities which the Nazi regime desired to instil in its future citizens, whilst also contributing to key debates on the political, social, and cultural history of the Third Reich, demonstrating that the history of education and youth can illuminate the broader history of this era in novel ways. Ultimately, the NPEA can be seen as the Nazi dictatorship's most effective educational experiment.

Helen Roche, Associate Professor in Modern European Cultural History, Durham University Helen Roche is Associate Professor in Modern European Cultural History at Durham University, having previously held research fellowships at Cambridge and UCL. She has published extensively on nineteenth- and twentieth-century German history, including the history of education, National Socialism, and classical reception studies. Key publications include Sparta's German Children (2013), Brill's Companion to the Classics, Fascist Italy and Nazi Germany (ed., 2018), and 'Surviving Stunde Null: Narrating the Fate of Nazi Elite-school Pupils during the Collapse of the Third Reich', which was awarded German History journal's 'Best Article Prize' in 2015. Recently, she co-founded 'Claiming the Classical', a global research network which maps twenty-first-century political appropriations of the ancient world. She is currently researching the history of everyday life under fascism in interwar Europe.

This feature require that you enable JavaScript in your browser.
END_OF_DOCUMENT_TOKEN_TO_BE_REPLACED

END_OF_DOCUMENT_TOKEN_TO_BE_REPLACED

This feature require that you enable JavaScript in your browser.
END_OF_DOCUMENT_TOKEN_TO_BE_REPLACED