After Occupy: Economic Democracy for the 21st Century (Hardcover) 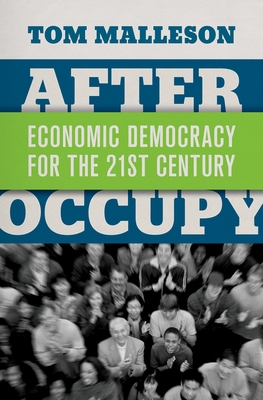 These days, it is easy to be cynical about democracy. Even though there are more democratic societies now (119 and counting) than ever before, skeptics can point to low turnouts in national elections, the degree to which money corrupts the process, and the difficulties of mass participation in
complex systems as just a few reasons why the system is flawed. The Occupy movement in 2011 proved that there is an emphatic dissatisfaction with the current state of affairs, particularly with the economy, but, ultimately, it failed to produce any coherent vision for social change. So what should
progressives be working toward? What should the economic vision be for the 21st century? After Occupy boldly argues that democracy should not just be a feature of political institutions, but of economic institutions as well. In fact, despite the importance of the economy in democratic societies, there is very little about it that is democratic. Questioning whether the lack of democracy
in the economy might be unjust, Tom Malleson scrutinizes workplaces, the market, and financial and investment institutions to consider the pros and cons of democratizing each. He considers examples of successful efforts toward economic democracy enacted across the globe, from worker cooperatives in
Spain to credit unions and participatory budgeting measures in Brazil and questions the feasibility of expanding each. The book offers the first comprehensive and radical vision for democracy in the economy, but it is far from utopian. Ultimately, After Occupy offers possibility, demonstrating in a
remarkably tangible way that when political democracy evolves to include economic democracy, our societies will have a chance of meaningful equality for all.

Tom Malleson is an Assistant Professor in the Social Justice and Peace Studies program at King's University College at Western University, Canada. He is the co-editor of Whose Streets? The Toronto G20 and the Challenges of Summit Protest (Between the Lines, 2011) and the author of Stand Up AgainstCapitalism (Between the Lines and New Internationalist, 2014).

This feature require that you enable JavaScript in your browser.
END_OF_DOCUMENT_TOKEN_TO_BE_REPLACED

END_OF_DOCUMENT_TOKEN_TO_BE_REPLACED

This feature require that you enable JavaScript in your browser.
END_OF_DOCUMENT_TOKEN_TO_BE_REPLACED