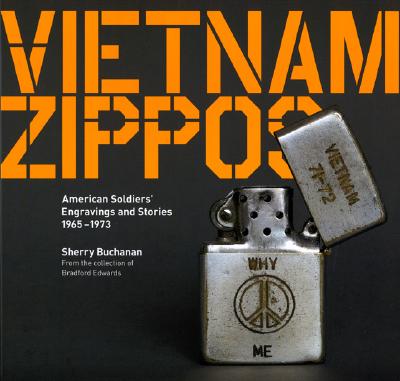 "We are the unwilling, led by the unqualified, doing the unnecessary for the ungrateful"
from an engraving on a Vietnam-era Zippo lighter
In 1965, journalist Morley Safer followed the United States Marines on a search and destroy mission into Cam Ne. When the Marines he accompanied reached the village, they ordered the civilians there to evacuate their homes grass huts whose thatched roofs they set ablaze with Zippo lighters. Safer's report on the event soon aired on CBS and was among the first to paint a harrowing portrait of the War in Vietnam. LBJ responded to the segment furiously, accusing Safer of having shat on the American flag. For the first time since World War II, American boys in uniform had been portrayed as murderers instead of liberators. Our perception of the war and the Zippo lighter would never be the same.
But as this stunning book attests, the Zippo was far more than an instrument of death and destruction. For the American soldiers who wielded them, they were a vital form of social protest as well. "Vietnam Zippos" showcases the engravings made by U.S. soldiers on their lighters during the height of the conflict, from 1965 to 1973. In a real-life version of the psychedelic war portrayed in Francis Ford Coppola's "Apocalypse Now," Sherry Buchanan tells the fascinating story of how the humble Zippo became a talisman and companion for American GIs during their tours of duty. Through a dazzling array of images, we see how Zippo lighters were used during the war, and we discover how they served as a canvas for both personal and political expression during the Age of Aquarius, engraved with etchings of peace signs and marijuana leaves and slogans steeped in all the rock lyrics, sound bites, combat slang, and antiwar mottos of the time.
Death from Above. Napalm Sticks to Kids. I Love You Mom, From a Lonely Paratrooper. The engravings gathered in this copiously illustrated volume are at once searing, caustic, and moving, running the full emotional spectrum with both sardonic reflections I Love the Fucking Army and the Army Loves Fucking Me and poignant maxims When the Power of Love Overcomes the Love of Power, the World Will Know Peace. Part pop art and part military artifact, they collectively capture the large moods of the sixties and the darkest days of Vietnam all through the world of the tiny Zippo.

Sherry Buchanan is an independent scholar, author, and publisher of Asian and Vietnamese contemporary art, history, and culture. A former features editor at the "Wall Street Journal," she has served as a columnist for the "International Herald Tribune" in Brussels, Paris, London, and Hong Kong. She remains active in children s charities in Vietnam and is a member of the London committee of Human Rights Watch."

"For American soldiers in Vietnam, the Zippo lighter was an essential talisman; its chrome casing was also a convenient canvas on which fighters expressed their anger and frustration. In Vietnam Zippos these unique artifacts tell the story of a war gone sour. Lyndon Johnson's observation that 'ultimate victory will depend upon the hearts and minds of the people' inspired the gleeful savagery of 'Give me your hearts and minds or I will wreck your fucking huts'; another solider rephrases Psalm 23 with 'Yea though I walk through the valley of the jungle of death, I will fear no evil, for I am the evilest son of a bitch in the jungle.' Later as enthusiasm for the war ebbed, lighters feature such deep thoughts as 'When the power of love is as strong as the love of power, then there will be peace.' Truer words were never engraved."-Playboy


"Zippo is as distinctly American as apple pie, the Stars & Stripes and the girl next door. . . . Whether carried as a talisman or as simply a convenient, easily-concealable object upon which to privately 'rage against the machine,' these Vietnam Zippos represent a previously untapped source for studying the 'new military history' of those who fought our most divisive war. . . . This book is highly recommended."-Armchair General


"Lavishly illustrated. . . . A subgenre of battlefield art that has probably never been collected as thoroughly or presented as elegantly as in ''Vietnam Zippos''. . . . [The lighters] tell hundreds of stories . . . and each one makes the book worth reading."-Army Times


"During the Vietnam War, the Zippo lighter was an indispensable part of a GI''s uniform. . . . At a time when American men and women are again fighting an unpopular war in a faraway land, it is fitting to remember the philosophers of that war who passionately reflected on their circumstances in this humble yet personal medium."-San Francisco Chronicle


"Sobering . . . Using Zippos from the collection of artist Bradford Edwards, Buchanan shows the personal histories of some of the millions who served [in Vietnam]. This unique approach is by turns funny, pornographic, informative and heartbreaking."-Minneapolis Star-Tribune


"[Vietnam Zippos] documents what the author, Sherry Buchanan, calls 'amulets and talismans bringing the keeper invulnerability, good luck and protection against evil.' Sadly, these personalized mementos also served as last testaments for many who were killed in action. . . . . This book, well designed and photographed by Misha Anikst, offers a rare personal dimension. The mottoes on these lighters, like 'When I die I will go to heaven because I spent my time in hell,' provide candid insight into what these soldiers thought of the war."-New York Times Book Review

"The engravings on lighters featured in this copiously illustated volume are at once searing, caustic, sentimental, humorous, but always moving, running the full emotional spectrum with both sardonic reflesions and poignant maxims. Part pop art and part military artifact, they collectively capture the mood of the sixties and the darkest days of Vietnam."


"A fascinating and specialized military cultural history that is a unique and recommended contribution to the growing library of Vietnam War histories."

This feature require that you enable JavaScript in your browser.
END_OF_DOCUMENT_TOKEN_TO_BE_REPLACED

END_OF_DOCUMENT_TOKEN_TO_BE_REPLACED

This feature require that you enable JavaScript in your browser.
END_OF_DOCUMENT_TOKEN_TO_BE_REPLACED