The Angel in the Marketplace: Adwoman Jean Wade Rindlaub and the Selling of America (Hardcover) 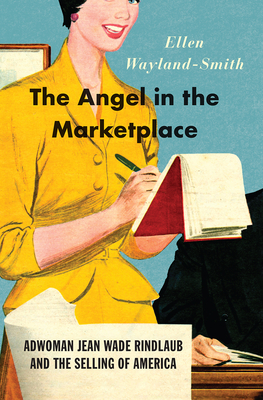 The popular image of a midcentury adwoman is of a feisty girl beating men at their own game, a female Horatio Alger protagonist battling her way through the sexist workplace. But before the fictional rise of Peggy Olson or the real-life stories of Patricia Tierney and Jane Maas came Jean Wade Rindlaub: a female power broker who used her considerable success in the workplace to encourage other women—to stick to their kitchens.

The Angel in the Marketplace is the story of one of America’s most accomplished advertising executives. It is also the story of how advertisers like Rindlaub sold a postwar American dream of capitalism and a Christian corporate order. Rindlaub was responsible for award-winning, mega sales-generating advertisements for all things domestic, including Oneida silverware, Betty Crocker cake mix, Campbell’s soup, and Chiquita bananas. Her success largely came from embracing, rather than subverting, the cultural expectations of women. She believed her responsibility as an advertiser was not to spring women from their trap, but to make that trap more comfortable.

Rindlaub wasn’t just selling silverware and cakes; she was selling the virtues of free enterprise. By following the arc of Rindlaub’s career from the 1920s through the 1960s, we witness how a range of cultural narratives—advertising chief among them—worked powerfully to shape women’s emotional and economic behavior in support of the free market system. Alongside Rindlaub’s story, Ellen Wayland-Smith provides a riveting history of how women were repeatedly sold the idea that their role as housewives was more powerful, and more patriotic, than any outside the home. And by buying into the image of morality through an unregulated market, many of these women helped fuel backlash against economic regulation and socialization efforts throughout the twentieth century.

The Angel in the Marketplace is a nuanced portrayal of a complex woman, one who both shaped and reflected the complicated cultural, political, and religious forces defining femininity in America at mid-century. This compelling account of one of advertising’s most fervent believers is a tale of a Mad Woman we haven’t been told.

Ellen Wayland-Smith is associate professor of writing at the University of Southern California. She is the author of Oneida: From Free Love Utopia to the Well-Set Table.

“Wayland-Smith’s lively history tells the unusual story of pioneering adwoman Jean Wade Rindlaub, who climbed the ladder from secretary to executive in the mid-twentieth century. Wayland-Smith insightfully shows how Rindlaub touted motherhood, home, love, and Christian service as the cornerstones of the free market and free world, but how late in life she became a campaigner for social justice. The Angel in the Marketplace illuminates one woman’s journey from advocating traditional notions of women’s place and the benefits of capitalism to questioning the underlying message of the ads she produced.”
— Kathy Peiss, author of Hope in a Jar: The Making of America's Beauty Culture

“The Angel in the Marketplace is a deeply researched history of the American advertising industry told through the life of Jean Wade Rindlaub. It is a portrait of a prolific lady and her eye-catching ads that promoted cutlery, makeup, soaps, and cake mixes to Americans. Wayland-Smith captures the synergy between corporate capitalism and Christianity that animated the world of Madison Avenue ad women and men of the twentieth century. This talented writer delivers sharp analysis of consumer culture from colorful stories of ‘copy’ she has excavated from the archives.”
— Michelle Nickerson, author of Mothers of Conservatism: Women and the Postwar Right

This feature require that you enable JavaScript in your browser.
END_OF_DOCUMENT_TOKEN_TO_BE_REPLACED

END_OF_DOCUMENT_TOKEN_TO_BE_REPLACED

This feature require that you enable JavaScript in your browser.
END_OF_DOCUMENT_TOKEN_TO_BE_REPLACED