Fútbol in the Park: Immigrants, Soccer, and the Creation of Social Ties (Fieldwork Encounters and Discoveries) (Paperback) 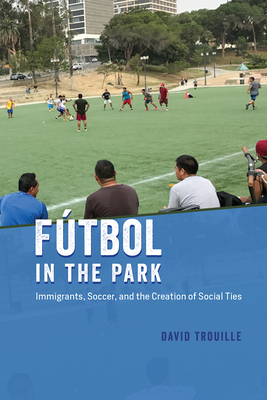 By David Trouille
Email or call for price

You know the scene: amateur soccer players battling over the ball, spectators cheering from the sidelines, vendors selling their wares from carts. Over the past half century, immigration from Latin America has transformed the public landscape in the United States, and numerous communities are witnessing one of the hallmarks of this transformation: the emergence of park soccer. In Fútbol in the Park, David Trouille takes us into the world of Latino soccer players who regularly play in an upscale Los Angeles neighborhood where they are not always welcome. Together on the soccer field, sharing beers after the games, and occasionally exchanging taunts or blows, the men build relationships and a sense of who they are. Through these engrossing, revealing, and at times immortalizing activities, they forge new identities, friendships, and job opportunities, giving themselves a renewed sense of self-worth and community. As the United States becomes increasingly polarized over issues of immigration and culture, Fútbol in the Park offers a close look at the individual lives and experiences of migrants.

David Trouille is associate professor of sociology at James Madison University. This is his first book.

“Trouille’s well-crafted ethnography gives us a close up view of working-class men’s sociability, and importantly, it also reveals the subtle and yet profound ways that borders and belonging operate for Latino immigrant men today.  An important reminder for us to pay attention to what unfolds on the ground.”
— Pierrette Hondagneu-Sotelo, University of Southern California

“I love this book. I really feel immersed in the social world of the jugadores—so much so that I laugh at their jokes and feel the joy of their successes. It’s seldom to see a social world depicted so carefully, so lovingly, and with such nuance."
— Colin Jerolmack, New York University

“Well-crafted and original. . . . Given the demonizing of Latino immigrant men we are witnessing, this book succeeds in humanizing this cruelly stereotyped slice of humanity. The depth of material here, gathered over years of field research, is unusual and adds immensely to the persuasiveness of the work. The actual lives Latino immigrant men create in our cities is an urgent subject that David Trouille explores in fascinating and cogent detail.”
— William Kornblum, the Graduate Center at the City University of New York

“The book does a fantastic job putting a new spin on classic concepts integral to the international migration literature, such as labor, gender, and social networks. At the same time, it challenges the reader to question otherwise taken-for-granted assumptions and concepts related to immigration. Fútbol in the Park speaks volumes to the ways that leisure in the park came to be such a meaningful community for so many.”
— Angela S. Garcia, University of Chicago

"There is a group of predominantly immigrant men, mostly from Mexico and Central America, who play midday pickup soccer games at Mar Vista Recreation Center in an affluent Los Angeles neighborhood. Some of these men work in the local neighborhood, while others live nearby in the west side of Los Angeles. In his ethnography Fútbol in the Park, Trouille chronicles the ways in which race shapes the experiences of these men: a demographic who are often written about in the context of labor, criminal justice, and immigration studies, and their access to public space through fencing and permits. Local residents’ efforts to curb their access to public space meant that their use of the park was shaped by precarity. What Trouille shows is that sport, and the spaces people create in pursuing their love of sport, are critical to navigating, surviving, and thriving in the struggles of living in the city."
— Public Books

"David Trouille’s 2021 ethnography, Fútbol in the Park: Immigrants, Soccer, and the Creation of Social Ties, offers readers a window into the social relations and processes of amateur immigrant soccer players in West Los Angeles. This seven-chapter book culminates a ten-year research project that included 48 interviews and hundreds of hours of participant observation on the soccer field and other personal and public spaces. Trouille’s book highlights the particular importance of public spaces for immigrant communities. He shows that it is not until we understand who uses public space, what activities occur in the space, and what social processes intersect with the space that we will understand the social value of these spaces."
— Idrotts Forum

This feature require that you enable JavaScript in your browser.
END_OF_DOCUMENT_TOKEN_TO_BE_REPLACED

END_OF_DOCUMENT_TOKEN_TO_BE_REPLACED

This feature require that you enable JavaScript in your browser.
END_OF_DOCUMENT_TOKEN_TO_BE_REPLACED