A Decent Life: Morality for the Rest of Us (Paperback) 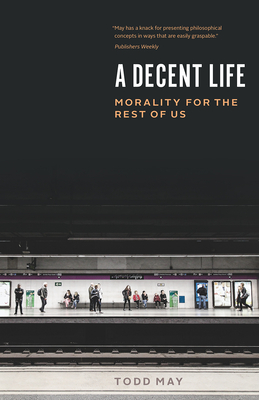 You’re probably never going to be a saint. Even so, let’s face it: you could be a better person. We all could. But what does that mean for you?

In a world full of suffering and deprivation, it’s easy to despair—and it’s also easy to judge ourselves for not doing more. Even if we gave away everything we own and devoted ourselves to good works, it wouldn’t solve all the world’s problems. It would make them better, though. So is that what we have to do? Is anything less a moral failure? Can we lead a fundamentally decent life without taking such drastic steps?

Todd May has answers. He’s not the sort of philosopher who tells us we have to be model citizens who display perfect ethics in every decision we make. He’s realistic: he understands that living up to ideals is a constant struggle. In A Decent Life, May leads readers through the traditional philosophical bases of a number of arguments about what ethics asks of us, then he develops a more reasonable and achievable way of thinking about them, one that shows us how we can use philosophical insights to participate in the complicated world around us. He explores how we should approach the many relationships in our lives—with friends, family, animals, people in need—through the use of a more forgiving, if no less fundamentally serious, moral compass. With humor, insight, and a lively and accessible style, May opens a discussion about how we can, realistically, lead the good life that we aspire to.

A philosophy of goodness that leaves it all but unattainable is ultimately self-defeating. Instead, Todd May stands at the forefront of a new wave of philosophy that sensibly reframes our morals and redefines what it means to live a decent life.

Todd May is the Class of 1941 Memorial Professor of the Humanities at Clemson University. He is the author of many books, including A Fragile Life and A Significant Life, both also published by the University of Chicago Press.

"While no one would confuse it for light reading, May’s style is conversational, frequently funny and overall, he comes across as a very, shall we say, decent guy. May’s book is not prescriptive but is actually something better: a meditation on how striving for decency is a route towards personal satisfaction and happiness, even in a world that may seem to disadvantage the decent. . . . The book acknowledges the complexity of human beings and the world at large and offers a way of thinking about those complexities without falling into the dreaded trap of 'moral relativism.' Put simply, I am a better person for having read this book."

"Most of us are not 'moral monsters,' argues May; nor do we 'strive to be moral saints.' The different schools of traditional moral philosophy put the stress on intentions, consequences of 'virtue ethics,' yet none is very useful for the vast majority of people who want to be decent without aspiring to total altruism. A Decent Life explores what this might mean in practice with regard to our relationships with family and friends; the strangers we run into; nonhuman animals; and the political sphere. It concludes with Nine Rules for Moral Decency, including 'Enjoy reading philosophy, even when it advises you to be better than you can reasonably be.'"
— Times Higher Education

"May has a knack for presenting philosophical concepts in ways that are easily graspable, and his advice for living 'a life with a goal more modest than altruism, but better than moral mediocrity' makes such a goal seem attainable for a wide audience. Anyone interested in living a more morally conscious life will want to give this wise guide a look."

"In the face of great injustice or radical indecency, it is tempting to give up our moral lives altogether. The challenges of being good seem impossibly daunting. Todd May has given us just a little bit of hope--a few practical suggestions for becoming just a little bit more decent. A Decent Life is the kind of book I will give to my students--or to my daughter: a humble, down-to-earth primer for living ethically in a world that seems intent on destroying itself. May has written a more-than-decent book. It is genuinely good."
— John Kaag, author of Hiking with Nietzsche: On Becoming Who You Are

"Some philosophers have argued that morality requires us repeatedly to sacrifice our wealth and pleasure for the sake of others, including distant strangers and even animals. Recognizing that most people believe otherwise and are unwilling to live this way, Todd May offers an alternative, more realistic vision of the moral life that is neither saintly nor heroic but nonetheless decent. In writing that is lucid and enlivened by stories drawn from his own and other people's experiences, he reveals how, by showing appropriate respect for the fact that others (including animals) have lives of their own to live, we can satisfy the demands of morality while retaining our ability to have fulfilling and meaningful lives. Particularly in its discussion of our relations with political opponents, this book is a timely, illuminating, and inspiring work of moral philosophy."
— Jeff McMahan, University of Oxford

"Moral philosophy often appears either as a very technical discipline or as a set of demands to be altruistic that few if any of us can realize. In this book, Todd May articulates the extremely appealing idea of a decent life as an alternative. He writes with the clarity of an analytical philosopher, but about existential themes that are usually addressed by continental thinkers. The book is almost completely without technical language, full of thought-provoking examples from everyday life, and it will be an edifying read for everyone who aspires to be a decent human being."
— Svend Brinkman, author of Standpoints: Ten Old Ideas in a New World

This feature require that you enable JavaScript in your browser.
END_OF_DOCUMENT_TOKEN_TO_BE_REPLACED

END_OF_DOCUMENT_TOKEN_TO_BE_REPLACED

This feature require that you enable JavaScript in your browser.
END_OF_DOCUMENT_TOKEN_TO_BE_REPLACED