Bill Monroe: The Life and Music of the Blue Grass Man (Music in American Life) (Hardcover) 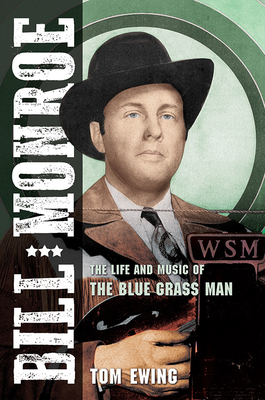 From cradle to great, the comprehensive real story of Bill Monroe

The Father of Bluegrass Music, Bill Monroe was a major star of the Grand Ole Opry for over fifty years; a member of the Country Music, Songwriters, and Rock and Roll Halls of Fame; and a legendary figure in American music. This authoritative biography sets out to examine his life in careful detail--to move beyond hearsay and sensationalism to explain how and why he accomplished so much.

Former Blue Grass Boy and longtime music journalist Tom Ewing draws on hundreds of interviews, his personal relationship with Monroe, and an immense personal archive of materials to separate the truth from longstanding myth. Ewing tells the story of the Monroe family's musical household and Bill's early career in the Monroe Brothers duo. He brings to life Monroe's 1940s heyday with the Classic Bluegrass Band, the renewed fervor for his music sparked by the folk revival of the 1960s, and his declining fortunes in the years that followed. Throughout, Ewing deftly captures Monroe's relationships and the personalities of an ever-shifting roster of band members while shedding light on his business dealings and his pioneering work with Bean Blossom and other music festivals.

Filled with a wealth of previously unknown details, Bill Monroe offers even the most devoted fan a deeper understanding of Monroe's towering achievements and timeless music.

Tom Ewing was the guitarist/lead singer of Bill Monroe and his Blue Grass Boys for ten years. He is the editor of The Bill Monroe Reader and wrote the ""Thirty Years Ago This Month"" column for Bluegrass Unlimited.

"Insightful . . .  [Bill Monroe: The Life and Music of the Blue Grass Man] presents bluegrass history as it happened, as well as a fresh look at 'this extraordinary individual.'" --Wall Street Journal

"A detailed, decade-by-decade, almost moment-by-moment chronicle of the Father of Bluegrass. Because of its thoroughness, it will be the standard biography."--No Depression

"Fans of bluegrass and old-school country will enjoy this behind-the-scenes look at Monroe's storied career."--Kirkus

"His biography will be valuable for anyone researching the roots of American music." --Shepherd Express

"Ewing skillfully captures Monroe's personal life, the relationships and the personalities of an ever-changing roster of band members, and his business dealings and his pioneering work with Bean Blossom and other music festivals." --Kentucky Mercury

"Filled with a wealth of previously unknown details, Bill Monroe offers even the most devoted fan a deeper understanding of Monroe's towering achievements and timeless music." --Pickin' Post

"This story has been told before, but never before so definitively as Ewing has related it in these pages." --Rambles.Net

"Highly recommended for any fan of country music or bluegrass." --PopCultureShelf.com

"With its sweeping narrative of Monroe's ancestry, his family, his band members and associates, the nine decades of his life in country music, Bill Monroe: The Life and Music of the Blue Grass Man is a case study in the history of a people. . . . It is one of a kind." --Journal of Folklore Research

"Ewing has a fine eye for detail, and a complex portrait emerges." --Old Time Herald "This account bears witness to the gigantic achievement which was Bill Monroe's music. His energy and creativity knew no bounds. This book successfully captures that."--Jim Rooney, Grammy-winning record producer and author of In It for the Long Run: A Musical Odyssey

"An exciting and rewarding read. No one knows the literature about and by Bill Monroe better than this author. He stitches what other readers have seen as fragments into the first deep and coherent narrative of Monroe's early years. They are sewn into a fabric of intense research into the time, place, and people in Monroe's life."--Neil V. Rosenberg, author of Bluegrass Generation: A Memoir

This feature require that you enable JavaScript in your browser.
END_OF_DOCUMENT_TOKEN_TO_BE_REPLACED

END_OF_DOCUMENT_TOKEN_TO_BE_REPLACED

This feature require that you enable JavaScript in your browser.
END_OF_DOCUMENT_TOKEN_TO_BE_REPLACED