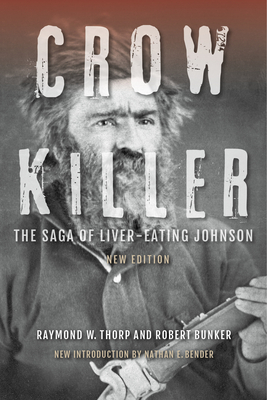 The movie Jeremiah Johnson introduced millions to the legendary mountain man, John Johnson. The real Johnson was a far cry from the Redford version. Standing 6'2 in his stocking feet and weighing nearly 250 pounds, he was a mountain man among mountain men, one of the toughest customers on the western frontier. As the story goes, one morning in 1847 Johnson returned to his Rocky Mountain trapper's cabin to find the remains of his murdered Indian wife and her unborn child. He vowed vengeance against an entire Indian tribe. Crow Killer tells of that one-man, decades-long war to avenge his beloved. Whether seen as a realistic glimpse of a long ago, fierce frontier world, or as a mythic retelling of the many tales spun around and by Johnson, Crow Killer is unforgettable. This new edition, redesigned for the first time, features an introduction by western frontier expert Nathan E. Bender and a glossary of Indian tribes.

Raymond W. Thorp is author of Bowie Knife and Spirit Gun of the West: The Story of Doc W. F. Carver, among other titles.Nathan E. Bender is an independent scholar and consultant in Laramie, Wyoming, who has written extensively on the Old West.

This feature require that you enable JavaScript in your browser.
END_OF_DOCUMENT_TOKEN_TO_BE_REPLACED

END_OF_DOCUMENT_TOKEN_TO_BE_REPLACED

This feature require that you enable JavaScript in your browser.
END_OF_DOCUMENT_TOKEN_TO_BE_REPLACED