Making Your Own Luck: From a Skid Row Bar to Rebuilding Indiana University Athletics (Paperback) 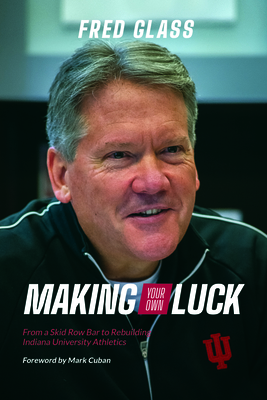 One man's odyssey from skid row to rebuilding a major collegiate sports program.

In Making Your Own Luck, former Indiana University athletic director Fred Glass recounts how even a self-described knucklehead learned to be prepared to recognize and seize opportunities and thus make his own luck through life.

Growing up in a skid row bar, having an alcoholic father, struggling with anxiety and self-doubt, and making his share of stupid mistakes, Glass had much to contend with in early life. However, supported by socially enlightened parents, a Jesuit education, and his soulmate, Barbara, his odyssey has led him to serve a mayor, a governor, a senator, and even a president.

With great humor and insightful reflection, Glass details how he helped keep the Colts in Indianapolis--he spearheaded a massive convention center expansion and the building of Lucas Oil Stadium and even helped to attract the Super Bowl to his hometown. Any of these accomplishments individually would be more than enough to call Glass's career a resounding success, but they were only the beginning. In the latest stage of his journey, Glass led the rebuilding of the athletic program of his beloved alma mater, Indiana University.

Featuring a foreword from IU alumnus and owner of the Dallas Mavericks, Mark Cuban, Making Your Own Luck is a must-read not only for Indiana sports fans, but for anyone that recognizes the importance of preparation, opportunity and action in creating your own success.

Fred Glass is a prominent Indianapolis attorney and civic leader who served as Indiana University's athletic director for nearly twelve years and is now a partner in the law firm Taft, Stettinius & Hollister. He and his wife Barbara have four children and a son-in-law and daughter-in-law, all of whom are Indiana University graduates, as well as five grandchildren.

This feature require that you enable JavaScript in your browser.
END_OF_DOCUMENT_TOKEN_TO_BE_REPLACED

END_OF_DOCUMENT_TOKEN_TO_BE_REPLACED

This feature require that you enable JavaScript in your browser.
END_OF_DOCUMENT_TOKEN_TO_BE_REPLACED