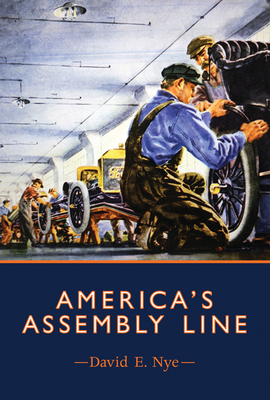 From the Model T to today's "lean manufacturing": the assembly line as crucial, yet controversial, agent of social and economic transformation.

The mechanized assembly line was invented in 1913 and has been in continuous operation ever since. It is the most familiar form of mass production. Both praised as a boon to workers and condemned for exploiting them, it has been celebrated and satirized. (We can still picture Chaplin's little tramp trying to keep up with a factory conveyor belt.) In America's Assembly Line, David Nye examines the industrial innovation that made the United States productive and wealthy in the twentieth century.

The assembly line—developed at the Ford Motor Company in 1913 for the mass production of Model Ts—first created and then served an expanding mass market. It also transformed industrial labor. By 1980, Japan had reinvented the assembly line as a system of “lean manufacturing”; American industry reluctantly adopted the new approach. Nye describes this evolution and the new global landscape of increasingly automated factories, with fewer industrial jobs in America and questionable working conditions in developing countries. A century after Ford's pioneering innovation, the assembly line continues to evolve toward more sustainable manufacturing.

David E. Nye is Senior Research Fellow at the Charles Babbage Institute and the History of Science and Technology program at the University of Minnesota and Professor Emeritus of American Studies at the University of Southern Denmark. His other books published by the MIT Press include Electrifying America and American Technological Sublime. He was awarded the Leonardo da Vinci Medal in 2005 and was knighted by the Queen of Denmark in 2013.

Nye's beautifully written interpretation covers so much ground that historians of technology, labor, business, international economics, and American culture will all find it an invaluable resource, offering new reasons to appreciate the hundred-year history of the assembly line.

This feature require that you enable JavaScript in your browser.
END_OF_DOCUMENT_TOKEN_TO_BE_REPLACED

END_OF_DOCUMENT_TOKEN_TO_BE_REPLACED

This feature require that you enable JavaScript in your browser.
END_OF_DOCUMENT_TOKEN_TO_BE_REPLACED