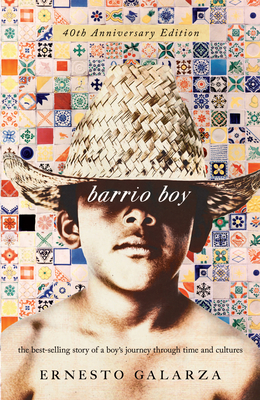 By Ernesto Galarza, Ilan Stavans (Introduction by)
Email or call for price

Barrio Boy is the remarkable story of one boy's journey from a Mexican village so small its main street didn't have a name, to the barrio of Sacramento, California, bustling and thriving in the early decades of the twentieth century. With vivid imagery and a rare gift for re-creating a child's sense of time and place, Ernesto Galarza gives an account of the early experiences of his extraordinary life--from revolution in Mexico to segregation in the United States--that will continue to delight readers for generations to come. Since it was first published in 1971, Galarza's classic work has been assigned in high school and undergraduate classrooms across the country, profoundly affecting thousands of students who read this true story of acculturation into American life. To celebrate the 40th anniversary of the publication of Barrio Boy, the University of Notre Dame Press is proud to reissue this best-selling book with a new text design and cover, as well an introduction--by Ilan Stavans, the distinguished cultural critic and editor of the Norton Anthology of Latino Literature--which places Ernesto Galarza and Barrio Boy in historical context.

Ernesto Galarza (1905-1984) was a labor organizer, historian, professor, and community activist. When he was eight, he migrated from Jalcocotan, Nayarit, Mexico, to Sacramento, California, where he worked as a farm laborer. He received a Ph.D. in history from Columbia University. In addition to Barrio Boy, he is the author of a number of books, including Strangers in Our Fields (1956), Merchants of Labor (1964), and Spiders in the House and Workers in the Fields (1970). In 1979, Dr. Galarza was nominated for the Nobel Prize in Literature.

This feature require that you enable JavaScript in your browser.
END_OF_DOCUMENT_TOKEN_TO_BE_REPLACED

END_OF_DOCUMENT_TOKEN_TO_BE_REPLACED

This feature require that you enable JavaScript in your browser.
END_OF_DOCUMENT_TOKEN_TO_BE_REPLACED