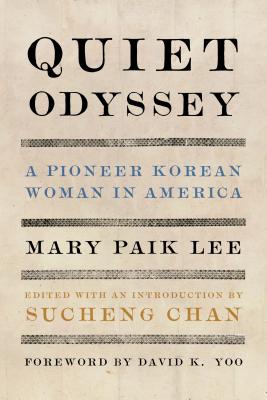 Mary Paik Lee, born Paik Kuang Sun in 1900, left her native country in 1905, traveling with her parents as a political refugee after Japan imposed control over Korea at the close of the Russo-Japanese War. Her father labored in the sugar plantations of Hawaii for a year and a half before taking his family to California, where Mrs. Lee has lived ever since. Though her father knew the comforts enjoyed by the educated traditional elite in Korea, after emigration he and his family shared the poverty stricken existence endured by thousands of Asian immigrants in early twentieth century America. Mrs. Lee's parents earned their living as farm laborers, tenant farmers, cooks, and janitors, and the family always took in laundry. Her father tried mercury mining until his health gave out. In their turn, Mrs. Lee and her husband farmed, sold produce, and managed apartment buildings.

The author is engagingly outspoken and is extremely observant of her social and natural surroundings. Recounted incidents take on memorable life, as do the sharply etched settings of California's agricultural and mining country. She tells of singular hardship surmounted with resilience and characteristic grace. During much of her life Asian Americans were not treated as full human beings, yet she kept a powerful vision of what the United States could be.

David K. Yoo is professor of Asian American studies and history at UCLA.

This feature require that you enable JavaScript in your browser.
END_OF_DOCUMENT_TOKEN_TO_BE_REPLACED

END_OF_DOCUMENT_TOKEN_TO_BE_REPLACED

This feature require that you enable JavaScript in your browser.
END_OF_DOCUMENT_TOKEN_TO_BE_REPLACED