Chasing Monarchs: Migrating with the Butterflies of Passage (Paperback) 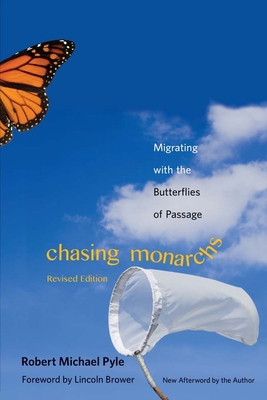 Although no one had ever followed North American monarch butterflies on their annual southward journey to Mexico and California, in the 1990s there were well-accepted assumptions about the nature and form of the migration. But to Robert Michael Pyle, a naturalist with long experience in monarch conservation, the received wisdom about the butterflies’ long journey just didn’t make sense. In the autumn of 1996 he set out to uncover the facts, to pursue the tide of “cinnamon sailors” on their long, mysterious flight.

Chasing Monarchs chronicles Pyle’s 9,000-mile journey to discover firsthand the secrets of the monarchs’ annual migration. Part road trip, part outdoor adventure, and part natural history study, Pyle’s book overturns old theories and provides insights both large and small regarding monarch butterflies, their biology, and their spectacular migratory travels. Since the book’s first publication, its controversial conclusions have been fully confirmed, and monarchs are better understood than ever before. The Afterword for this volume includes not only updated information on the myriad threats to monarch butterflies, but also various efforts under way to ensure the future of the world’s most amazing butterfly migration.

Robert Michael Pyle is an award-winning author of eighteen books, including Wintergreen, for which he received the John Burroughs Medal. He is founder of the Xerces Society for Invertebrate Conservation and has worked in every state and many countries as a butterfly ecologist, writer, speaker, and teacher. He lives along a tributary of the Lower Columbia River in southwest Washington.

“In his new book, ‘Chasing Monarchs,’ the naturalist Robert Michael Pyle chronicles his efforts to follow the monarchs on their winter migration by tracking them on the ground in a battered old Honda Civic. . . . The author’s evident passion for and understanding of butterflies invest his narrative with energy and interest.”—New York Times
— New York Times

“Chasing Monarchs tells the engrossing story of his adventurous journey with these graceful wanderers—down the Columbia, Snake, Bear, and Colorado rivers, across the Bonneville Salt Flats, and through the Chiricahua Mountains to Mexico, returning north along the California coast. Part travelogue, part scientific study, Chasing Monarchs is one of the most fascinating books ever written about butterflies.”—Monarch News
— Monarch News

“Pyle provides a deeply informed commentary that is an introduction to the natural history and lore of the monarch butterfly—the archetypal migratory species that has captured our imaginations—and extends to a larger story of why what happens to the monarch butterfly matters to us humans.”—Francie Chew, Tufts University
— Francie Chew

This feature require that you enable JavaScript in your browser.
END_OF_DOCUMENT_TOKEN_TO_BE_REPLACED

END_OF_DOCUMENT_TOKEN_TO_BE_REPLACED

This feature require that you enable JavaScript in your browser.
END_OF_DOCUMENT_TOKEN_TO_BE_REPLACED