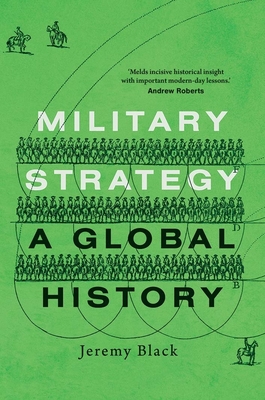 A global account of military strategy, which examines the practices, rather than the theories, of the most significant military figures of the past 400 years

Strategy has existed as long as there has been organised conflict. In this new account, Jeremy Black explores the ever-changing relationship between purpose, force, implementation, and effectiveness in military strategy and its dramatic impact on the development of the global power system.

Taking a “total” view of strategy, Black looks at leading powers—notably the United States, China, Britain, and Russia—in the wider context of their competition and their domestic and international strengths. Ranging from France’s ancien régime and Britain’s empire building to present-day conflicts in the Middle East, Black devotes particular attention to the strategic practice and decisions of the Kangxi Emperor, Clausewitz, Napoleon, and Hitler.

Jeremy Black is emeritus professor of history at the University of Exeter. Black has published widely in military history, including A Short History of War and Air Power. His other works include Maps and History and Naval Warfare.

“Black’s greatest strength is his deep knowledge of international history, which is fully on display.”—Lawrence Freedman, History Today

“Military Strategy is worth the time invested in reading it. The introduction, essentially a comprehensive literature review of strategic thought in a mere 24 pages, should be required reading for all interested in strategy, especially those who expect to support its practice.”—Lt. Col. Nathan Finney, ARMY Magazine

“Once again, Jeremy Black has shown that he can meld incisive historical insight with important modern-day lessons. Anyone connected with strategic decision-making, even far beyond the military sphere, will profit from reading this hugely readable and scholarly work, as will anyone interested in seeing how the great decision-makers of the past got things so right occasionally, but so wrong all too often.”—Andrew Roberts, author of Churchill: Walking with Destiny

“Jeremy Black is one of Britain’s foremost historians and a world leader in the subject of military strategy. He has expanded his purview to the global story of strategy in a bold and imaginative study.”—John Bew, author of Citizen Clem: A Life of Attlee

“This book succeeds in communicating the dynamics of strategy across a huge canvas in an intelligent, engaging but also an extremely erudite fashion. . . . It not only informs the reader of many aspects of the global history of strategy, it encourages readers to think about the subject matter and the historical challenges as they read.”—Alaric Searle, author of Armoured Warfare: A Military, Political and Global History

This feature require that you enable JavaScript in your browser.
END_OF_DOCUMENT_TOKEN_TO_BE_REPLACED

END_OF_DOCUMENT_TOKEN_TO_BE_REPLACED

This feature require that you enable JavaScript in your browser.
END_OF_DOCUMENT_TOKEN_TO_BE_REPLACED