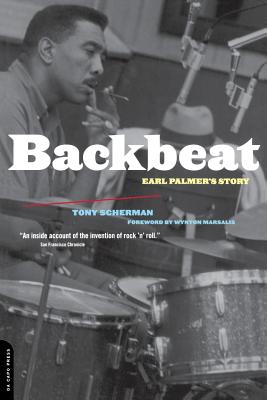 There he is, drumming on "Tutti Frutti," "You've Lost That Lovin' Feelin'," and thousands of other songs. As a studio player in New Orleans and Los Angeles from the 1940s through the 1970s, Earl Palmer co-created hundreds of hits and transformed the lope of rhythm and blues into full-tilt rock and roll. He was, as a result, one of the first session men to be inducted into the Rock and Roll Hall of Fame. Palmer's distinctive voice alternates with the insights of music journalist and historian Tony Scherman in an unforgettable trip through the social and musical cultures of mid-century New Orleans and the feverish world of early rock.

Tony Scherman has written about American music and culture for more than two dozen publications, including the New York Times and Rolling Stone. He edited the anthology The Rock Musician and co-edited its companion volume, The Jazz Musician. He lives in Rockland County, New York.

This feature require that you enable JavaScript in your browser.
END_OF_DOCUMENT_TOKEN_TO_BE_REPLACED

END_OF_DOCUMENT_TOKEN_TO_BE_REPLACED

This feature require that you enable JavaScript in your browser.
END_OF_DOCUMENT_TOKEN_TO_BE_REPLACED