My Boy Will Die of Sorrow: A Memoir of Immigration From the Front Lines (Hardcover) 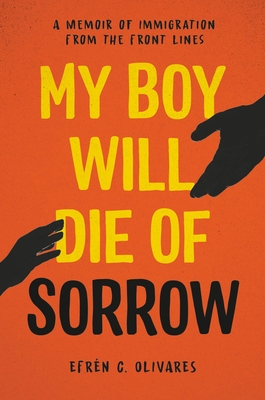 This deeply personal perspective from a human rights lawyer—whose work on the front lines of the fight against family separations in South Texas intertwines with his own story of immigrating to the United States at thirteen—reframes the United States' history as a nation of immigrants but also a nation against immigrants.

In the summer of 2018, Efrén C. Olivares found himself representing hundreds of immigrant families when Zero Tolerance separated thousands of children from their parents at the U.S.-Mexico border. Twenty-five years earlier, he had been separated from his own father for several years when he migrated to the U.S. to work. Their family was eventually reunited in Texas, where Efrén and his brother went to high school and learned a new language and culture.

By sharing these gripping family separation stories alongside his own, Olivares gives voice to immigrants who have been punished and silenced for seeking safety and opportunity. Through him we meet Mario and his daughter Oralia, Viviana and her son Sandro, Patricia and her son Alessandro, and many others. We see how the principles that ostensibly bind the U.S. together fall apart at its borders.

My Boy Will Die of Sorrow reflects on the immigrant experience then and now, on what separations do to families, and how the act of separation itself adds another layer to the immigrant identity. Our concern for fellow human beings who live at the margins of our society—at the border, literally and figuratively—is shaped by how we view ourselves in relation both to our fellow citizens and to immigrants. He discusses not only law and immigration policy in accessible terms, but also makes the case for how this hostility is nothing new: children were put in cages when coming through Ellis Island, and Japanese Americans were forcibly separated from their families and interned during WWII. By examining his personal story and the stories of the families he represents side by side, Olivares meaningfully engages readers with their assumptions about what nationhood means in America and challenges us to question our own empathy and compassion.

Efrén C. Olivares is the Deputy Legal Director of the Immigrant Justice Project at Southern Poverty Law Center. He was the lead lawyer in a successful landmark petition to the Inter-American Commission on Human Rights on behalf of families separated under the Zero Tolerance policy. He previously directed the Racial and Economic Justice Program at the Texas Civil Rights Project. His writings on immigration policy have also been published by the New York Times, USA Today, and Newsweek, and he has testified before Congress and at briefings on Capitol Hill about immigration and border policies. Part of his work representing separated families was featured in the CBS News Documentary The Faces of Family Separation, released in October 2019. He has also been interviewed as an expert attorney on immigrants’ rights issues on numerous TV and radio shows, and was featured in John Legend’s “Can’t Just Preach” series.

Olivares was the first member of his family to attend college. He is a graduate of the University of Pennsylvania and Yale Law School.

"My Boy Will Die of Sorrow is a visceral, behind the scenes account of the human impacts of our immigration system, from the inner machinations at the height of the family separation crisis to the cruelties faced by immigrants and their families every single day. At a time where harrowing immigration headlines dominate our news, this book is an intimate invitation to join Olivares through his firsthand experience as an immigrant and an advocate on the frontlines. It's an invitation every American should be honored to receive, and those who accompany him on this journey will undoubtedly walk away better for it."

“A riveting account of the immigrant’s experience under Zero Tolerance and an inspiring story of the author’s journey from humble beginnings in Mexico to Yale Law to human rights lawyer, My Boy Will Die of Sorrow is probing, necessary, and enlightening. An essential work from an important voice in the national conversation on immigration and human rights.”

“Everyone should understand the horrors of family separation as told by the man who stood against a wave of crushing atrocities at a defining moment in American history… a heart wrenching account of suffering, loss, and hope.” —Laura Peña, Director of Racial and Economic Justice, the Texas Civil Rights Project

“A captivating, intimate portrayal of one of the human rights crises of our time. My Boy Will Die of Sorrow brings to life the human plight of the men, women and children who make the dangerous journey across borders, which often gets lost in the debates around immigration policies, and tells the moving stories of families caught in what is perhaps the most militarized border of the continent… I highly recommend this book to anyone looking for a fresh perspective that goes deep behind the headlines of immigration, borders, and family separation.”—Felipe González Morales, United Nations Special Rapporteur on the Human Rights of Migrants

"Efrén Olivares’ My Son Will Die of Sorrow wakes readers from political overwhelm through his warmth and humanity, even as he discusses the deeply tragic events surrounding the Trump administration’s Zero Tolerance policy that separated children from their parents at the U.S. border... the book engenders feelings of hope and galvanized action."—Latino Book Review

“A powerful mix of human rights memoir and examination of America’s flawed immigration policies…[Olivares’s] account includes interviews with immigrants alongside analyses of complicated legal processes and a history of the southern border….A harrowing firsthand account of inhumane immigration policies with which we all must come to terms.”—Kirkus Reviews (starred)

“Part memoir, part exploration of the racism inherent in U.S. immigration policy, and part tribute to the families who have suffered at the hands of the U.S. government, My Boy Will Die of Sorrow is a thought-provoking look at the soul of the United States.”
—Booklist

"an informative and gut-wrenching indictment of the state of the U.S. immigration policy. This vital resource and collection of testimonies can serve to keep the recent horrors it depicts from disappearing into the past."—Shelf Awareness

This feature require that you enable JavaScript in your browser.
END_OF_DOCUMENT_TOKEN_TO_BE_REPLACED

END_OF_DOCUMENT_TOKEN_TO_BE_REPLACED

This feature require that you enable JavaScript in your browser.
END_OF_DOCUMENT_TOKEN_TO_BE_REPLACED