In the Kingdom of Men (Hardcover) 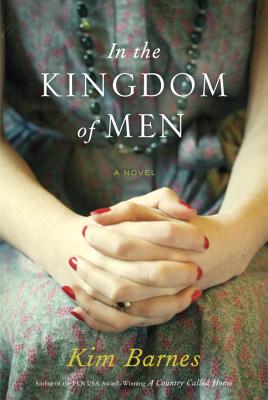 Here is the first thing you need to know about me:  I’m a barefoot girl from red-dirt Oklahoma, and all the marble floors in the world will never change that.
Here is the second thing:  that young woman they pulled from the Arabian shore, her hair tangled with mangrove—my husband didn’t kill her, not the way they say he did.

1967. Gin Mitchell knows a better life awaits her when she marries hometown hero Mason McPhee. Raised in a two-room shack by her Oklahoma grandfather, a strict Methodist minister, Gin never believed that someone like Mason, a handsome college boy, the pride of Shawnee, would look her way. And nothing can prepare her for the world she and Mason step into when he takes a job with the Arabian American Oil company in Saudi Arabia. In the gated compound of Abqaiq, Gin and Mason are given a home with marble floors, a houseboy to cook their meals, and a gardener to tend the sandy patch out back. Even among the veiled women and strict laws of shariah, Gin’s life has become the stuff of fairy tales. She buys her first swimsuit, she pierces her ears, and Mason gives her a glittering diamond ring. But when a young Bedouin woman is found dead, washed up on the shores of the Persian Gulf, Gin’s world closes in around her, and the one person she trusts is nowhere to be found.
Set against the gorgeously etched landscape of a country on the cusp of enormous change, In the Kingdom of Men abounds with sandstorms and locust swarms, shrimp peddlers, pearl divers, and Bedouin caravans—a luminous portrait of life in the desert. Award-winning author Kim Barnes weaves a mesmerizing, richly imagined tale of Americans out of their depth in Saudi Arabia, a marriage in peril, and one woman’s quest for the truth, no matter what it might cost her.

Kim Barnes is the author of two memoirs and two previous novels, including "A Country Called Home, "which received the 2009 PEN Center USA Literary Award in fiction and was named a best book of 2008 by "The Washington Post, "the "Kansas City Star, "and "The Oregonian. "She is the recipient of the PEN/Jerard Fund Award for an emerging woman writer of nonfiction, and her first memoir, "In the Wilderness, "was nominated for the Pulitzer Prize. Her work has appeared in a number of publications and anthologies, including "The""New York Times; MORE "magazine; "The Oprah Magazine;""Good Housekeeping; Fourth Genre; The Georgia Review; Shenandoah; "and the Pushcart Prize""anthology. Barnes is a professor of writing at the University of Idaho and lives with her husband, the poet Robert Wrigley, on Moscow Mountain.

“Lyrical . . . It takes guts to title a novel after a line from the Bible—‘the Most high rules in the kingdom of men’—and then to begin Chapter 1 with possibly the most famous biblical reference available: ‘In the beginning.’ Following through, Kim Barnes casts her protagonist and narrator, a young American girl called Gin, in the image of a certain female character from a certain creation myth. . . . In the Kingdom of Men [is] something more than a novel about an Okie who causes trouble in a foreign land. It’s that, and a feminist bildungsroman.” —Juliet Lapidos, The New York Times Book Review

“In the Kingdom of Men resembles Kipling’s Plain Tales from the Hills as much as any other book. The men run the administration of a society made up of darker-skinned and, by definition, inferior people, but the women run the white-skinned men, casting an invisible but exceedingly strong net over the group. . . . The menus here are . . . so enticing that you’ll want to stop reading for a while and put together a sumptuous dinner. . . . A culturally complex story about American venality and greed.” —Carolyn See, The Washington Post

“Seldom has a book drawn me into its clutches as quickly as this one did. By the second sentence I was hooked on the first person account of Virginia Mae Mitchell . . . With a compelling narrative that never flags, we are quickly transported from the dusty, red clay plains to the seemingly infinite desert sandscapes of Saudi Arabia . . . From the waves of numbing heat and the vastness of the shimmering desert to blinding sandstorms, Biblical locust invasions, and the insidious, stifling boredom found within the confines of Mad Men-era Americana in the midst of an alien culture, Barnes makes the city of Abqaiq come alive.” —Jay Trachtenberg, The Austin Chronicle

“With courage and zest, Kim Barnes’s novel In the Kingdom of Men takes an intimate look at . . . the rarified and harshly beautiful world of eastern Saudi Arabia. . . . Her Americans are loud and sharp and leaping from the page, casually refilling their cocktail glasses and whooping it up at the Beachcomber’s Ball, some joyfully, some desperately, but all clinging to their own habits while betraying a general disconnection from—and disregard for—the Arabia all around them. And that disregard leads to the dark, tragic heart of the novel. . . . Within these lyrical pages is a story well worth investigating.” —Zoë Ferraris, San Francisco Chronicle

“Drawn with skill and filled with evocative period detail . . . the plot is unfurled like a rich carpet, rolling out over a vast space before it gently settles and fills every corner. Barnes . . . gets more motion and feeling into a deceptively plain paragraph than many novelists can cram into a chapter. She ensures that Gin’s evolution is authentic, a wary, quiet observer and survivor who plumbs the depths of her new world with heart and courage. The women who populate this novel are all heroic in their various ways, a wonderful juxtaposition alongside this man’s world build by oil money.” —Kimberly Marlowe Harnett, The Seattle Times

“Barnes regales us with the exploits of her high-spirited protagonist, Virginia ‘Gin’ McPhee, who follows her husband Mason from Texas to the oil fields of Saudi Arabia. . . . Energetic and fast paced . . . [Barnes] does an excellent job of conjuring the sights, smells and heat of Saudi Arabia. She also has an astute understanding of the subtle, persistent pull of homesickness that lurks beneath the glamour of expatriate life.” —Laura Albritton, Houston Chronicle

“Arresting . . . A richly wrought historical novel . . . Barnes seems incapable of writing a lazy sentence. It would be easy enough to enjoy her novel for its images alone—Gin learning to roast coffee beans over an open fire and milk camels straight into enamel bowls; the local children who line their eyes with kohl and drip with precious stones—but its feats are more than just descriptive. We have here the portrait of a woman whose ambitions outsize the time and place she lives, and also of what happens to a marriage when taken out of a familiar context. In the Kingdom of Men, in many ways, is a close inspection of how radically a life can be rescaled, and how quickly. With a protagonist like this, Barnes could have set her novel in a single room, and we’d keep reading.” —Alice Gregory, The Boston Globe

“Kim Barnes has created a heroine for the ages in Gin McPhee—fierce, sad and tenacious, a self-described ‘barefoot girl from red-dirt Oklahoma’ who is consumed with the desire to see and know everything going on outside the country-club-esque compound in the vast Arabian Desert where, against all odds, she has found herself living. In the Kingdom of Men is a gripping thriller that plays out amid the oil-inflected relationships of the Americans and the Saudis (further complicated by the Bedouins and the Indians who serve them both) in the moody landscape of the Arabian frontier.” —Pam Houston, More Magazine

“Barnes brings her own childhood struggles with a strict, isolating Pentecostalism to her enrapturing third novel about a tough, fearless Oklahoma girl raised with religious austerity and misogyny, who finds herself living in a luxurious yet oppressive American oil company enclave in 1970 in Saudi Arabia. . . . Barnes animates a magnetizing cast of cosmopolitan characters, lingers over descriptions of food and clothing, dramatizes cultural contrasts and sexual tension, and brings this intense and compassionate novel of corporate imperialism, prejudice, corruption, and yearning to such gorgeously vivid, suspenseful life that the story’s darkness is perfectly balanced by the keen wit and blazing pleasure of its telling. A veritable Mad Men of the desert, with the depth of a Graham Greene novel.” —Donna Seaman, Booklist (starred review)

“An immersive and bracing exploration of one woman’s search for freedom amid repression. . . . Gin is a delightful heroine whose tenacity animates those around her, a quality that lays the groundwork for an extraordinary adventure and unsettling conclusion. Barnes deftly teases humanity out of corruption and hypocrisy, and her language is finely wrought and her pacing masterful—Gin’s story develops languidly, then draws taut as the stakes rise.” —Publishers Weekly (starred and boxed review)

“When her husband Mason gets a job with Aramco, Oklahoman Gin McPhee moves from small-town life to a wider—and wilder—world of privilege, corruption and Middle Eastern geopolitics in the 1960s. . . . Barnes writes poetically and intensely about personal conflict and subtly informs the reader about continuing western misunderstandings of Middle Eastern culture.” —Kirkus Reviews

“A swashbuckling, thrilling ride of a book, In The Kingdom of Men transports readers to the sands of Arabia and the recesses of the human heart. Ginny McPhee is a heroine unlike any other, negotiating love, politics, the intricacies of marriage, and the journey to selfhood. A vivid and compelling tale.” —Diana Abu-Jaber, author of Birds of Paradise

“I was transfixed by Kim Barnes’s thoughtful, elegant account of a young American woman's experience of 1960s Saudi Arabia. It describes a piece of the world that seems utterly fresh, never-written-about, and In the Kingdom of Men brings it to vivid life. This is a historical novel which is not only romantic and dramatic and compelling, but has particular, important relevance to our current age.” —Dan Chaon, author of Stay Awake and Await Your Reply

“This is a mesmerizing novel, set in the American heartland and Saudi Arabia—two locations that on the face of it couldn't be more different. But from the point of view of a woman not allowed to be herself, the two places have startling similarities. We read, in part, to be taken elsewhere. In the Kingdom of Men succeeds mightily in this. We also read because we enjoy good writing. You’ll find that in abundance here.” —Elizabeth Berg, author of Once Upon a Time, There Was You

“A great windswept adventure full of tension and suspense, In the Kingdom of Men is moving in the truest sense, sweeping the reader along with its gorgeous prose, a rich setting, and most of all, Gin McPhee, one of those rare characters who sits up on page one, grabs you and pulls you into her world.” —Jess Walter, author of The Financial Lives of the Poets

“This novel has it all: an intriguing story that thunders to a thrilling climax, characters who grab our hearts, gorgeous prose and a setting that stuns the reader at every turn. Arabia!” —Ellen Sussman, author of French Lessons

“If you want to understand, right in your gut, the history of the American relationship with Saudi Arabia; if you want a magical, layered story of west-inside-east, culture layered over culture, and the slow--still ongoing--revolution of gender and race oppression, In the Kingdom of Men is your book. It's Mad Men meets The Sheltering Sky, a Revolutionary Road for the oil-addicted. It's also an utter pleasure to read.” —Anthony Doerr, author of Memory Wall and About Grace

This feature require that you enable JavaScript in your browser.
END_OF_DOCUMENT_TOKEN_TO_BE_REPLACED

END_OF_DOCUMENT_TOKEN_TO_BE_REPLACED

This feature require that you enable JavaScript in your browser.
END_OF_DOCUMENT_TOKEN_TO_BE_REPLACED