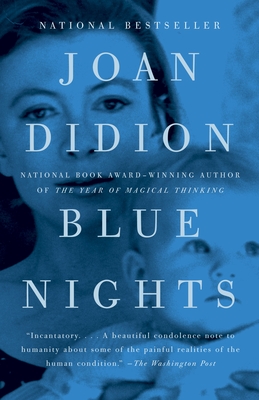 “In The Year of Magical Thinking, Didion was able to clearly convey her emotions following the death of her husband while maintaining every bit of her iconic and masterful style. Blue Nights is both a continuation of that earlier book and a completely different work that takes the form of a stream-of-consciousness examination of life told through memory snapshots of the life and loss of her daughter, Quintana Roo, as well as Didion's own doubts and fears. This is a haunting, beautiful book.”
— Michael Link, Joseph-Beth Booksellers, Cincinnati, OH

NEW YORK TIMES BESTSELLER • A work of stunning frankness about losing a daughter, from the bestselling, award-winning author of The Year of Magical Thinking and Let Me Tell You What I Mean

Richly textured with memories from her own childhood and married life with her husband, John Gregory Dunne, and daughter, Quintana Roo, this new book by Joan Didion is an intensely personal and moving account of her thoughts, fears, and doubts regarding having children, illness and growing old.

As she reflects on her daughter’s life and on her role as a parent, Didion grapples with the candid questions that all parents face, and contemplates her age, something she finds hard to acknowledge, much less accept. Blue Nights—the long, light evening hours that signal the summer solstice, “the opposite of the dying of the brightness, but also its warning”—like The Year of Magical Thinking before it, is an iconic book of incisive and electric honesty, haunting and profound.

JOAN DIDION was born in Sacramento in 1934 and graduated from the University of California, Berkeley, in 1956. After graduation, Didion moved to New York and began working for Vogue, which led to her career as a journalist and writer. Didion published her first novel, Run River, in 1963. Didion’s other novels include A Book of Common Prayer (1977), Democracy (1984), and The Last Thing He Wanted (1996).

In 2005, Didion was awarded the American Academy of Arts & Letters Gold Medal in Criticism and Belles Letters. In 2007, she was awarded the National Book Foundation’s Medal for Distinguished Contribution to American Letters. A portion of National Book Foundation citation read: "An incisive observer of American politics and culture for more than forty-five years, Didion’s distinctive blend of spare, elegant prose and fierce intelligence has earned her books a place in the canon of American literature as well as the admiration of generations of writers and journalists.” In 2013, she was awarded a National Medal of Arts and Humanities by President Barack Obama, and the PEN Center USA’s Lifetime Achievement Award.

Didion said of her writing: "I write entirely to find out what I’m thinking, what I’m looking at, what I see and what it means.” She died in December 2021.

“Incantatory.... A beautiful condolence note to humanity about some of the painful realities of the human condition.” —The Washington Post

“Heartbreaking.... A searing inquiry into loss and a melancholy mediation on mortality and time.” —Michiko Kakutani, The New York Times

“Joan Didion is a brilliant observer, a powerful thinker, a writer whose work has been central to the times in which she has lived. Blue Nights continues her legacy.” —The Boston Globe

“Exemplary...provocative.... [Didion] comes fully to realize, and to face squarely, the dismaying fact that against life’s worst onslaughts nothing avails, not even art; especially not art.” —John Banville, The New York Times Book Review

“A beautiful, soaring, polyphonic eulogy.... What appears on the surface to be an elegantly, intelligently, deeply felt, precisely written story of the loss of a beloved child is actually an elegantly, intelligently, deeply felt, precisely written glimpse into the abyss, a book that forces us to understand, to admit, that there can be no preparation for tragedy, no protection from it, and so, finally, no consolation.” —The New York Review of Books

“Profoundly moving.... This is first and last a meditation on mortality.” —San Francisco Chronicle

“Ms. Didion has translated the sad hum of her thoughts into a profound meditation on mortality. The result aches with a wisdom that feels dreadfully earned.” —The Economist

“For the great many of us who cherish Joan Didion, who can never get enough of her voice and her brilliant, fragile, endearing, pitiless persona, [Blue Nights] is a gift.” —Newsday

“Exquisite.... She applies the same rigorous standards of research and meticulous observation to her own life that she expects from herself in journalism. And to get down to the art of what she does, her sense of form is as sharp as a glass-cutter’s, and her sentences fold back on themselves and come out singing in a way that other writers can only wonder at and envy.” —The Washington Independent Review of Books

“Ms. Didion has created something luminous amid her self-recrimination and sorrow. It’s her final gift to her daughter—one that only she could give.” —Wall Street Journal

“Didion’s bravest work. It is a bittersweet look back at what she’s lost, and an unflinching assessment of what she has left.” —BookPage

“Yes, this is a book about aging and about loss. Mostly, though, it is about what one parent and child shared—and what all parents and children share, the intimacy of what bring you closer and what splits you apart.” —Oprah.com

“Breathtaking.... With harrowing honesty and mesmerizing style, Didion chronicles the tragic death of her daughter, Quintana, interwoven with memories of their happier days together and Didion’s own meditations on aging.” —Newsweek

“Darkly riveting.... The cumulative effect of watching her finger her recollections like beads on a rosary is unexpectedly instructive. None of us can escape death, but Blue Nights shows how Didion has, with the devastating force of her penetrating mind, learned to simply abide.” —Elle

“In this supremely tender work of memory, Didion is paradoxically insistent that as long as one person is condemned to remember, there can still be pain and loss and anguish.” —Christopher Hitchens, Vanity Fair

This feature require that you enable JavaScript in your browser.
END_OF_DOCUMENT_TOKEN_TO_BE_REPLACED

END_OF_DOCUMENT_TOKEN_TO_BE_REPLACED

This feature require that you enable JavaScript in your browser.
END_OF_DOCUMENT_TOKEN_TO_BE_REPLACED