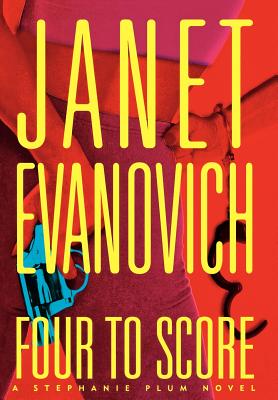 By Janet Evanovich
$27.95
Email or call for price.

Janet Evanovich, bestselling author of "One for the Money," "Two for the Dough," and "Three to Get Deadly," scores big with "Four to Score," her most thrilling Stephanie Plum adventure yet. Working for her bail bondsman cousin Vinnie, Stephanie is hot on the trail of revenge-seeking waitress Maxine Nowicki, whose crimes include bail jumping, theft, and extortion. Someone is terrifying Maxine's friends, and those who have seen her are turning up dead. Also on the hunt for Maxine is Joyce Barnhardt, Stephanie's archenemy and rival bounty hunter. Stephanie's attitude never wavers-- even when aided by crazy Grandma Mazur, ex-hooker and wannabe bounty hunter Lula, and transvestite rock musician Sally Sweet-- and even when Stephanie makes an enemy whose deadly tactics escalate from threatening messages to firebombs. All of this pales in comparison, though, with an even greater danger Stephanie faces, when, homeless and broke, she and her hamster Rex move in with a vice cop Joe Morelli. RATED PG35 for licentious wit and libidinous cohabitation.

Janet Evanovich is the author of the Stephanie Plum books, including "One for the Money" and "Sizzling Sixteen," and the Diesel & Tucker series, including "Wicked Appetite." Janet studied painting at Douglass College, but that art form never quite fit, and she soon moved on to writing stories. She didn't have instant success: she collected a big box of rejection letters. As she puts it, "When the box was full I burned the whole damn thing, crammed myself into pantyhose and went to work for a temp agency." But after a few months of secretarial work, she managed to sell her first novel for $2,000. She immediately quit her job and started working full-time as a writer. After 12 romance novels, she switched to mystery, and created Stephanie Plum. The rest is history. Janet's favorite exercise is shopping, and her drug of choice is Cheeze Doodles. She and her husband live in New Hampshire, in house with a view of the Connecticut River Valley.

This feature require that you enable JavaScript in your browser.
END_OF_DOCUMENT_TOKEN_TO_BE_REPLACED

END_OF_DOCUMENT_TOKEN_TO_BE_REPLACED

This feature require that you enable JavaScript in your browser.
END_OF_DOCUMENT_TOKEN_TO_BE_REPLACED