Catfish and Mandala: A Two-Wheeled Voyage Through the Landscape and Memory of Vietnam (Paperback) 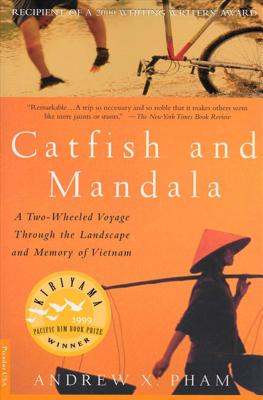 Catfish and Mandala is the story of an American odyssey—a solo bicycle voyage around the Pacific Rim to Vietnam—made by a young Vietnamese-American man in pursuit of both his adopted homeland and his forsaken fatherland. Intertwined with an often humorous travelogue spanning a year of discovery is a memoir of war, escape, and ultimately, family secrets.

Andrew X. Pham was born in Vietnam and raised in California. His father had been a POW of the Vietcong; his family came to America as "boat people." Following the suicide of his sister, Pham quit his job, sold all of his possessions, and embarked on a year-long bicycle journey that took him through the Mexican desert; on a thousand-mile loop from Narita in South Korea to Kyoto in Japan; and, after five months and 2,357 miles, to Saigon, where he finds "nothing familiar in the bombed-out darkness." In Vietnam, he's taken for Japanese or Korean by his countrymen, except, of course, by his relatives, who doubt that as a Vietnamese he has the stamina to complete his journey ("Only Westerners can do it"); and in the United States he's considered anything but American. A vibrant, picaresque memoir written with narrative flair and an eye-opening sense of adventure, Catfish and Mandala is an unforgettable search for cultural identity.

Andrew X. Pham was born in Vietnam in 1967 and moved to California with his family after the war. He lives in San Jose, California. Catfish and Mandala is his first book.

“Thoreau, Theroux, Kerouac, Steinbeck, Mark Twain and William Least Heat-Moon--the roster of those who have turned to their travels for inspiration includes some of America's most noted scribes. Now add Andrew X. Pham to the list . . . Catfish and Mandala records a remarkable odyssey across landscape and into memory.” —The Seattle Times

“An engaging and vigorously told story . . . a fresh and original look at how proud Vietnamese on the war's losing side reconciled having their identity abruptly hyphenated to Vietnamese-American.” —Gavin Scott, Chicago Tribune

“A modern Plutarch might pair Pham's story with that of Chris McCandless, the uncompromising young man whose spiritual quest led him to a forlorn death in Alaska. Pham, instead of seeking out remote places where he could explore fantasies of self-sufficiency, instictively understood that self-knowledge emerges from engagement with others. In his passionate telling, his travelogue acquires the universality of a bildungsroman.” —The New Yorker

“A trip so necessary and so noble makes others seem like mere jaunts or stunts.” —The New York Times Book Review

“Far more than a travelogue . . . Catfish and Mandala is a seamlessly constructed work deftly combining literary techniques with careful, evenhanded reportage . . . A gifted writer . . . Pham opens readers to the full sadness of the human condition on both sides of the world, marveling at spiritual resilience amid irreconcilable facts.” —Roland Kelts, The Philadelphia Inquirer

“Stunning . . . A brilliantly written memoir in which a young Vietnamese-American uses a bicycle journey in his homeland as a vehicle to tell his eventful life story . . . Pham (born Pham Xuan An) fled Vietnam with his family in 1977 at age ten. Raised in California, he worked hard, went to UCLA, and landed a good engineering job. A few years ago, rebelling against family pressures to succeed and a patronizing, if not racist, work environment, Pham quit his job. Much to his parents' displeasure, he set off on bicycle excursions through Mexico, Japan, and, finally, Vietnam. 'I have to do something unethnic,' he says. 'I have to go. Make my pilgrimage.' In his first book, Pham details his solo cycling journeys, mixing in stories of his and his family's life before and after leaving Vietnam. The most riveting sections are Pham's exceptional evocations of his father's time in a postwar communist reeducation (read: concentration) camp and the family's near miraculous escape by sea from their homeland . . . An insightful, creatively written report on Vietnam today and on the fate of a Vietnamese family in America.” —Kirkus Reviews

“[Pham] fuels his memoir and travelogue, full of both comic and painful adventures, with a broad appreciation of the variety and vividness of creation. The people, the landscapes, the poverty and grime of Vietnam live for us through him, a man full of sadness and unrequited longing and love . . . a powerful memoir of grief and a doomed search for cultural identity.” —Vince Passaro, Elle

“In narrating his search for his roots, Vietnamese-American and first-time author Pham alternates between two story lines. The first, which begins in war-torn Vietnam, chronicles the author's hair-raising escape to the U.S. as an adolescent in 1977 and his family's subsequent and somewhat troubled life in California. The second recounts his return to Vietnam almost two decades later as an Americanized but culturally confused young man. Uncertain if his trip is a 'pilgrimage or a farce,' Pham pedals his bike the length of his native country, all the while confronting the guilt he feels as a successful Viet-kieu (Vietnamese expatriate) and as a survivor of his older sister Chai, whose isolation in America and eventual suicide he did little to prevent. Flipping between the two story lines, Pham elucidates his main dilemma: he's an outsider in both America and Vietnam--in the former for being Vietnamese, and the latter for being Viet-kieu . . . In writing a sensitive, revealing book about cultural identity, Pham also succeeds in creating an exciting adventure story.” —Publishers Weekly

“Perhaps the most American writing theme is the road trip as search for identity. Pham has written a memoir (and, in the process, a travelogue) that will be widely appealing. His family immigrated to the U.S. after escaping from Vietnam, where his father had been held in a communist 're-education camp' after the war. Once in the U.S., his parents worked grueling hours to afford to educate their children. During those years Pham's sister ran away after being beaten by her father, and when she returned years later, she had become a transsexual. Eventually, she commited suicide, and her death was a dark, unspoken family secret. Pham, who had become an engineer, had an identity crisis and left his career to bicycle through the U.S., Mexico, Japan, and, eventually, Vietnam, to examine his roots. Seeing his native country through Americanized eyes, he finds it both attractive and repellent. Ultimately, he must reconcile to being an outsider in all cultures.” —Eric Robbins, Booklist

This feature require that you enable JavaScript in your browser.
END_OF_DOCUMENT_TOKEN_TO_BE_REPLACED

END_OF_DOCUMENT_TOKEN_TO_BE_REPLACED

This feature require that you enable JavaScript in your browser.
END_OF_DOCUMENT_TOKEN_TO_BE_REPLACED