All About All About Eve: The Complete Behind-the-Scenes Story of the Bitchiest Film Ever Made! (Paperback) 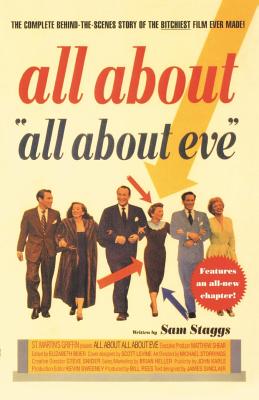 To millions of fans, All About Eve represents all that's witty and wonderful in classic Hollywood movies. Its old-fashioned, larger-than-life stars--including Bette Davis, Marilyn Monroe, Anne Baxter, George Sanders, and Celeste Holm--found their best roles in Eve and its sophisticated dialogue has entered the lexicon.

But there's much more to know about All About Eve. Sam Staggs has written the definitive account of the making of this fascinating movie and its enormous influence on both film and popular culture. Staggs reveals everything about the movie--from who the famous European actress Margo Channing was based on, to the hot-blooded romance on-set between Bette Davis and costar Gary Merrill, from the jump-start the movie gave Marilyn Monroe's career and the capstone it put on director Joseph L. Mankeiwicz's.

All About "All About Eve" is not only full of rich detail about the movie, the director, and the stars, but also about the audience who loved it when it came out and adore it to this day.

SAM STAGGS is the author of several books, including biographies of movies: All About All About Eve, Close-Up on Sunset Boulevard, When Blanche Met Brando, and Born to be Hurt. He has written for publications including Vanity Fair and Architectural Digest. He lives in Dallas, Texas.

“This is the best movie book I've ever read. I devoured it in one sitting. Staggs may not have invented the genre, but he's certainly perfected it.” —Florence King, author of Confessions of a Failed Southern Lady

“Stagg's gossipy goulash celebrates all of Eve's incarnations, from the original tale...to the Broadway musical Applause...[He] provides thoughtful film analysis and a thrilling final coup: an interview with the real Eve.” —People

This feature require that you enable JavaScript in your browser.
END_OF_DOCUMENT_TOKEN_TO_BE_REPLACED

END_OF_DOCUMENT_TOKEN_TO_BE_REPLACED

This feature require that you enable JavaScript in your browser.
END_OF_DOCUMENT_TOKEN_TO_BE_REPLACED