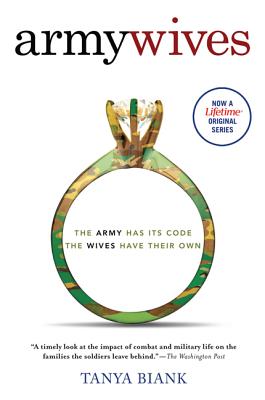 By Tanya Biank
$18.99
Not in-stock currently- expect arrival in 1-14 business days
(This book cannot be returned.)

Army Wives goes beyond the sound bites and photo ops of military life to bring readers into the hearts and homes of today's military wives.

Biank tells the story of four typical Army wives who, in a flash, find themselves in extraordinary circumstances that ultimately force them to redefine who they are as women and wives. This is a true story about what happened when real life collided with army convention.

Army Wives is a groundbreaking narrative that takes the reader beyond the Army's gates, taking a close look at the other woman—the Army itself—and how its traditions, rules and war-time realities deeply impact marriage and home life.

Tanya Biank is a Fulbright scholar, journalist and syndicated columnist. She is a contributing writer to several military-related publications and is a frequent guest speaker. Her book Army Wives was the basis for Lifetime TV's hit show.  The daughter of a career Army officer, Tanya lives in Virginia with her husband, an Army officer assigned to the Pentagon.

“...a timely look at the impact of combat and military life on the families the soldiers leave behind.” —The Washington Post

“Army Wives captivates readers with an up close and personal look into the 'real' everyday lives and challenges of Army spouses. Kudos to Ms. Biank for portraying each spouse's story with such heartfelt compassion.” —Victoria M. Parham, Host of Military Spouse Talk Radio

“Tanya Biank has written a stunningly detailed, eye-opening account of what it is really like to be an Army wife. Army Wives demonstrates that while it is tough to be a soldier, it can be even tougher to be the wife of a soldier. Army Wives should be required reading for every military spouse and all those who are considering marrying into the military.” —Ron Martz , Military affairs correspondent, Atlanta Journal-Constitution and co-author of Heavy Metal: A Tank Company's Battle to Baghdad

“Tanya Biank captures the atmosphere of military living and the pressure brought to bear on young wives to measure up as partners in their husbands' careers. . . In reading this detailed and insightful book we receive some hope in the fact that the military administration has recognized and has taken steps to support both husbands and wives in the future.” —Ann Jordan Klunder, National President, The Society of Daughters of the United States Army

“…Biank's novelistic sense of detail and suspense vividly demonstrates how ‘the Army…could bring couples closer together…or it could rip relationships apart.' Army wives cope with unpredictable deployments and struggle to raise children alone, often on small paychecks, in a community both tightknit and sharply judgmental. ‘Army wives serve, too,' says Biank – in an institution ambivalent about families. She makes sympathetic both their pride and their tragedies.” —Publishers Weekly

“Biank has strong credentials for understanding and explaining army culture: in addition to having been a military reporter, she is the daughter and wife of army officers. Her very readable and thoughtful book delves into a rarely studied segment of the army.” —Library Journal

“Biank has created a vivid picture of life today as a military spouse.” —Kirkus Reviews

“Tanya Biank's experience as a reporter has produced a candid and detailed study of her subjects and a riveting story, certain to engage Army wives of all generations. The incidents described and the issues surfaced in Ms. Biank's hard-hitting piece surely will get her readers' attentions and will cause us to say to each other, ‘Now, what can we do about it?'” —Joanne Patton, the wife of Major General George S. Patton and the daughter-in-law of General George S. Patton, Jr.

“From tragic to bittersweet, this is the untold story of the wives of our Army warriors--a powerful look for civilians and soldiers alike into the lives of women who each day embrace Duty, Honor, Sacrifice.” —W.E.B. Griffin

“In Under the Sabers, Tanya Biank invites civilians into the military world, a foreign culture. She introduces us to the true meaning of honor and duty as we see the strains on wives with a spouse serving in a war zone. She richly describes the bonds among military families that serve to support a wife during her spouse's deployments and simultaneously may limit her autonomy. Under the Sabers shows that military families are both the hidden casualties of war and a resilient group who meet the challenges for growth during every deployment. Tanya Biank helps those of us who work with families of deployed soldiers become better able to understand and serve them.” —Dr. Jaine L. Darwin, PsyD Harvard professor, Clinical Instructor in Psychology, Harvard Medical School and Co-Director, SOFAR, Strategic Outreach to Families of All Reservists

“Thank you for putting a voice to the hardships and triumphs of this military life.” —Tara Crooks, host of Army Wife Talk Radio

“A very realistic and enjoyable read about the pains and pleasures of military life.” —www.militarybrat.com

This feature require that you enable JavaScript in your browser.
END_OF_DOCUMENT_TOKEN_TO_BE_REPLACED

END_OF_DOCUMENT_TOKEN_TO_BE_REPLACED

This feature require that you enable JavaScript in your browser.
END_OF_DOCUMENT_TOKEN_TO_BE_REPLACED